As part of the WA Country Health Service (WACHS) Wheatbelt Southern Inland Health Initiative 4 towns in the wheatbelt received new Hospitals, these being Mukinbudin, Williams, Pingelly & Cunderdin of these sites Cunderdin still remains under the control of WACHS, although negotiations are in progress with local government to discuss change of ownership.

The thought of a fully function building and associated buildings sitting vacant was too good an opportunity to pass by, so Training Manager for Northam SES Sarge Bottacin set about looking at a regional exercise with an earthquake scenario hitting Cunderdin, As Sarge said “a building and property site of this size doesn’t come begging often, it would be a great opportunity to enhance our skills in Communications, Search, First Aid, Basic General Rescue, First Aid, and multi unit involvement”.

So started months of letter writing, communications, meetings between WACHS and with Support from DFES Regional Office, approval was granted by WACHS to use the Hospital Campus for a Regional Exercise.

With the first Hurdle out of the way, next came the months of planning and site visits, (With the amount of time spent in Cunderdin by Sarge & DO Matthew Breimer, residents in Cunderdin had started to think of us as being local residents).

23rd November 2019 was the date set for the exercise, and what a day, teams from Northam, Toodyay, Merredin, Mundaring & Kalgoorlie SES, along with St John’s Ambulance Service and Wyalkatchem Emergency Service Cadets (our enthusiastic casualties) all joined to what turned out to be a great day, WA Police Service were also to attend but unfortunate officer were called away for operational duties

From the dramatic start when we had someone come screaming from the building and it was on, whilst all teams were allocated tasks, it was commendable to see teams giving their colleagues in other team’s assistance when it was needed, no questions asked, they just got and helped.

To add drama during the exercise Police informed Our Ops team that next door in the high school there were also people needing assistance (at this point we also need to thank Cunderdin High School in allowing us to use their site).

So for three hours it was all go go go, with all finally coming to an end with a debrief and an enjoyable lunch and fellowship.  A great day, we all came home with alot of great feedback and areas where we can enhance and improve our skills at unit level.

Some pictures taken during the exercise 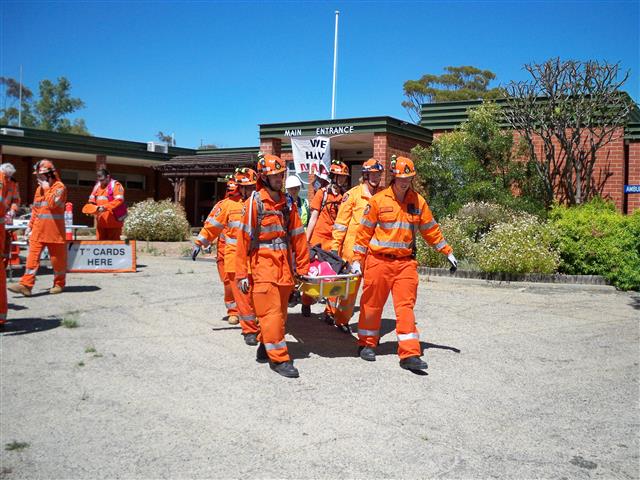