SES Volunteers from the Broome Unit have rescued a 76 year old woman after she had become lost  after walking out on the tidal flats at Port Smith lagoon, 160 kilometres south of Broome.  The woman’s partner became worried by her absence after a couple of hours and staff from the local caravan park searched for several hours, before they notified police.  At dawn a full search was launched involving nine State Emergency Service personnel from Broome, the local Karajarri Rangers and a helicopter.

Around 10am Sunday, searchers in a dingy spotted the missing woman clinging to mangrove branches.  Police said she was suffering from shock and had some cuts on her arms and feet from climbing in the mangrove thickets to try stay clear of the rising waters, but was in surprising good spirits.  She had been able to manage her diabetes with lollies carried in a bum-bag and was checked by nurses at the nearby Aboriginal community of Bidyadanga. 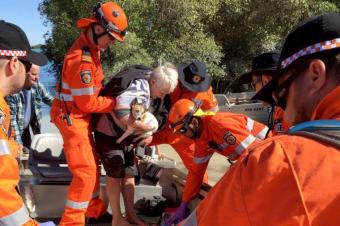