Tom Price Police, St John Ambulance and State Emergency Service volunteers attended the scene along with the Rangers. It was decided the only way to safely rescue the man was to undertake a vertical lift rescue back up the cliff face.

St John Ambulance personnel provided initial first aid to the man prior to the rescue operation being conducted. WA Police and SES volunteers then worked together to lift the man back to safety.

The injured man, a 25 year old man from High Wycombe, was taken to Tom Price Hospital for treatment to his injuries, including a broken arm and a laceration above one of his eyes.

A Picture of the Incident 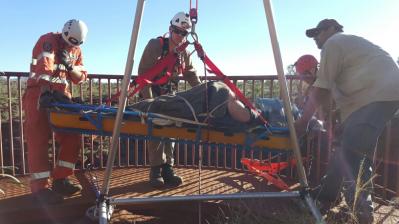