The SESVA wish to congratulate Jim McLean of Northshore SES Unit for his successful nomination of the Emergency Service Medal (ESM):
Photo: Jim in action before the media camera’s (Source Northshore web site) 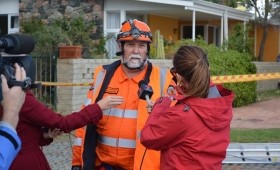 Mr James Gregor MacLEAN, joined the Perth Unit of the Western Australia State Emergency Service (WA SES) in January 1982. He initially joined the Communications Section before moving into the Rescue Section. In 1989 he was appointed to the position of Deputy Local Manager and was instrumental in ensuring the smooth relocation of the Unit from Northbridge to Leederville.  As Local Manager, which he took on in 2007, he has been at the forefront in encouraging and maintaining close relationships with the local government areas and with other Government and Non-Government agencies. Additionally his passion and commitment to the SES has seen Unit membership numbers steadily increase. As Local Manager, he was instrumental in developing an improved and more transparent management structure. He is a qualified trainer/assessor for a range of SES courses and delivers training to members on almost all scheduled training courses undertaken by the Northshore Unit and often on training courses being conducted by other Units or by the DFES Academy. He is held in high regard by his colleagues.