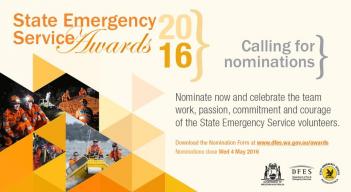 SESVA President Gordon Hall says it’s time to nominate your volunteers for this year “SES Awards” as nominations are Now Open and it’s time to act.  Gordon said as “we know SES volunteers play an integral part in the safety of our communities and these awards help recognise outstanding SES volunteers, either individually or as a team, who have gone above and beyond what is expected of them”.

I encourage Units to nominate their SES volunteers for these prestigious Awards.

The awards are in the following categories:

All nominees must be active, operational members of their SES unit.

Nominations close Wednesday the 4th of May 2016