4 Weeks On Thankyou Concert
James Blundell, iconic country singer, played to an appreciative audience tonight, Wednesday 17 February. This was a Thankyou Concert for all Volunteers associated with the recent fires in Waroona, Harvey and Preston Beach areas.  James donated his services along with a number of locally based Pinjarra businesses. The concert was conceived and organised by community local, Peter Ramsay and a team of Volunteers which was held under the stars at the Pinjarra Race Club.  Supporting acts who also donated their musical talents were Paul Vickery and Leather n Lace.  Donations made from gate entry and other sources added to over $2000, which is destined for the Lord Mayors Distress Relief Fund.  Unfortunately, concert goers were aware that some other emergency service Volunteers were having to respond to another fire at Harvey, a short distance down the SW Highway.
Phillip Petersen ESM 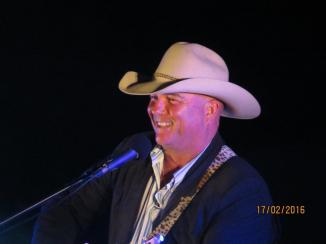 James Blundell at the concert