Jim Ridgewell SES Volunteer from Gosnells SES Unit wrote , yesterday(7th of January 2016) Joe Taylor and I  took a group of 6  F&R firefighters from the Maddington Station down to Waroona for a crew change. Whilst there I took a series of photos, one in particular you might find interesting as it really gives perspective to what was a truly awesome fire. If you zoom in on this photo, to the left and below the light you will be just able to make out a helicopter, which we presume to be a media flight. The F&R guys I was talking to informed me the media need to stay above 1500 ft. One F&R guy with 20 years experience stated he had never seen anything like this fire before.
This photo (below) was taken from the oval in Waroona looking south, not that far from this fire. As I watched the smoke it was billowing like smoke does from a chimney and rolling towards us in it’s immenseness. I have other photos if you want to look at them or if they will be of any help.

We met Armadale and Kalamunda units there, both utilising busses the Association supplied, so they are working hard as intended. Just thought you might like to hear that

Webmasters Note – this story should have been posted on the 8th of January, my apologies to Jim for my oversight. 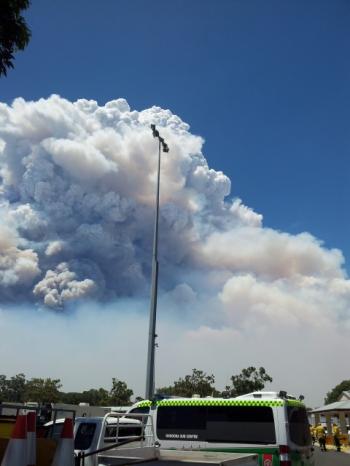