Minister Jacob presented Bruce and Kay Withnell with the prestigious Parks and Wildlife Volunteer of the Year award. He said the Withnells showed great commitment as full-time caretakers of the homestead at Matuwa over a six-month period, welcoming and managing visitors and maintaining amenities while contributing to the Rangelands Restoration project at the former pastoral lease. “They also went above and beyond the call of duty, responding with initiative and dedication when two bushfires came through the area, threatening the fenced enclosure where many species of rare and unique native animals live.”            Source: Touring WA Issue 28
Bruce Withnell OAM is a long standing member of the Harvey SES Unit. He was recognised years ago for his commitment to SES and in particular to the units Road Crash Rescue response with an Order of Australia medal (OAM). 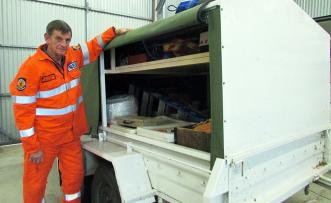