Chaddy collects his National Medal
SES Volunteer, Craig Chadwick, (Chaddy to his friends) was presented with National Medal by DFES Commissioner Wayne Gregson APM last night at the Rockingham SES Unit.  The Australian National Medal recognises long and diligent service by members of recognised government and voluntary organisations that risk their lives or safety to protect or assist the community in enforcement of the law or in times of emergency or natural disaster.  Craig joined the State Emergency Service (SES) in 1999 with the Morawa SES Unit where his value was very quickly realized. After qualifying in General Rescue and Storm Damage he very quickly became involved in road crash rescue, a prime role for the rural Morawa SES Unit.

Craig was the Morawa SES Local Manager for many years and was regularly involved in Midwest regional training. He was also a regional representative for the SES Consultative Committee and the SES Volunteer Association.  Three years ago Craig moved to Perth and joined Rockingham SES Unit where he was able to provide his expertise as a General Rescue and Storm Damage trainer.  Craig soon became the Rescue Officer and in the past eighteen months he has been the Deputy Manager for Rescue and active part of the Rockingham SES Unit’s management team.

Craig had been the principal for the Western Australia Agricultural College at Morawa and now is an associate principal at the Warnbro Community High School.
In his spare time, Chaddy has a passion for hot rods. He is a judge in a Hotrod Association and is building a car in his garage. More about that on his Facebook page.
Well done Chaddy!  Thanks to DFES Commissioner Wayne Gregson for personally presenting the medal. 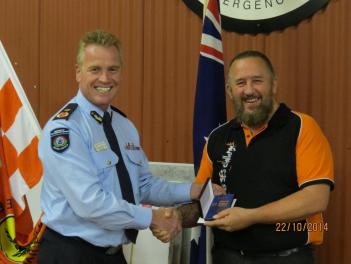