Remember these
I found this, now historical, copy of my West Australian State Emergency Service_ Civil Defence Identity Card. This one would have been, according to date, issued to me when I was a SES Volunteer at Karratha and is signed by the Pilbara Regional Director, Duncan Glendenning. This would have been an update from the one issued to me a few years earlier when I was a Volunteer at Mandurah SES, issued by South West Regional Director, Nial Wilmont.  The Blue triangle on Orange background is the international symbol for Civil Defence.

During the 1980’s, it required the use of special Polaroid camera kit which had to be circulated around the state from SES Headquarters located at Leake Street, Belmont.  Interestingly, the ID card describes my hair in 1985 as black, which it was then.  Civil Defence or civil protection is an effort to protect the citizens of a state (generally non-combatants) from military attack. It uses the principles of emergency operations: Prevention, mitigation, Preparation, Response, or emergency evacuation and Recovery. Programs of this sort were initially discussed at least as early as the 1920s and were implemented in many countries, but only became widespread after the threat of nuclear weapons was realised.

Since the end of the Cold War, the focus of civil defense has shifted from military attack to emergencies and disasters in general. The new concept is described by a number of terms, each of which has its own specific shade of meaning, such as crisis management, emergency management, emergency preparedness, contingency planning, emergency services, and civil protection.

In Australia, the Civil Defence role evolved to the birth of the volunteer-based State Emergency Service (SES). The SES was formed in Western Australia in 1959.
The SES is an Australian volunteer organisation that provides emergency help during and after declared (natural or otherwise) disasters. The SES is also the primary or secondary agency for emergencies, such as storm damage, flood damage, building damage, traffic hazards and road crash rescue. In other scenarios the SES may provide a support role to other agencies, particularly police and fire. The SES is operational 24 hours a day.

The SES provides assistance to local communities in times of need. Because every community is different, every SES Unit has a slightly different set of roles and activities. Depending on the needs of the local community, a Unit may perform only some or all of these roles, such as:

Note: The source, Wikipedia, may not reflect contemporary SES roles and management. Each state/territory manages SES according to its own emergency management needs and legislation. That means that some roles maybe the primary function of another emergency agency in some state/territories. 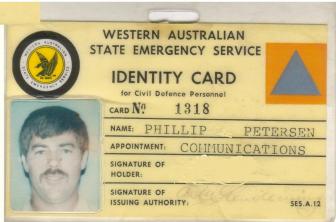