On Monday the 16th of June the Melville SES Unit held a farewell function for retiring members Kevin Wrightson and Robyn Trainer.  Both Kevin and Robyn have been local Managers of the Unit and are going south to Bridgetown to take up a small farming property.  Kevin worked for many years in the marine industry and joined the SES in 1980. He worked his way through the ranks and was appointed local Manager in 1986 and stood down from that position in 2006. He remained a valued member of the Unit and mentored many new members as they joined. He was awarded the National Medal in 1995 and the first clasp in 2005.In   2006 he was awarded the Emergency Services Medal and was also Melville citizen of the year.   Robyn ,who was a Teacher for many years, joined Melville in 1998 and quickly qualified in several SES courses and is an excellent Instructor in those skills .  She  succeeded Kevin as Manager of the Unit.

In 1999 Kevin was given the task of helping relocating  Moora  evacuees at Noalimba Hostel, after the town was flooded, including arranging accommodation for the many cats, dogs, cockies, and kangaroos brought with the evacuees .He was in charge of the Unit during the 1994 storms and in common with most of the Metro Units had to deal with some hundreds of storm damage incidents. Robyn had only taken charge of the Unit for a short time when shr had to deal with the 2006 tornado which tore through part of Melville and caused over 100 RFAs.  Presentations were made to both departing members by DO Will Blackshaw who presented Kevin with his 35 year SES membership badge.  Both members will be sorely missed and the Melville Unit wish them well in their new venture.

SESVA President Gordon Hall said “What an awesome job these two emergency responders did as Volunteers in their and other peoples communities. Well done and thanks for all of your hard work and leadership in the SES”. 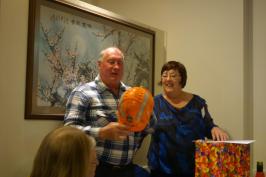