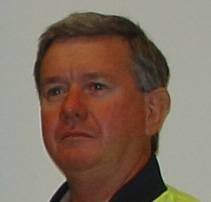 Mr Patton joined the Karratha State Emergency Service (SES) Unit in 1985. After initial training and gaining experience, he worked his way through the ranks to serve in management positions within the Unit. He is currently the Karratha SES Local Manager. As Local Manager for the past 6 years he has been responsible for the management of the Unit for both operational and non-operational aspects. Through his outstanding management the unit continues to grow and remains a strong force within the Pilbara District. Despite the Karratha SES unit being within a membership catchment area that is very transient in nature, it continually holds approximately 45-50 active members, testament to Mr Patton’s exceptional ability to manage all functions of the Unit. Since taking on the role of Local Manager he has also fulfilled the role of Incident Controller in many operations.

His outstanding commitment to the community in effective management and mitigation of such events has continually provides significant benefits. This is evident in the effective response of the Unit resulting in the local community being able to move forward into the recovery phase in a timely and efficient manner. He has also been actively involved in the clean-up and search and rescue for people following a number of cyclones over the years, including Tropical Cyclones Bobby, Olivia, Vance and George. The dedication and efforts provided by Mr Patton and the Karratha team was recognised with the Unit winning the Team Achievement Award for their efforts at the 2007 WA SES.

Awards. For some time the Kimberley District was without a permanent regional representative on the SES Volunteer Association. With his knowledge of SES and the local geographical area, along with the challenges faced by units in these remote areas, Mr Patton nominated and was successful in becoming this representative on the Association. Since his appointment he continues in his stride to ensure that these units are fully represented and informed.

SESVA President Gordon Hall said ” On Behalf of the SESVA and SES Volunteers, Congratulations for being named in the Queens Honour list for an ESM, this is definitely well deserved for many years of devoted work in your community through a number of organisations including Apex but most importantly the SES”.