It’s with great sadness that the SESVA advises the passing of Jim Burnett today .  Jim was a staff member for over 20 years for the WASES and left FESA in 2001.  During his time with SES and FESA Jim was involved in many operations and was the Chief Operations Officer for Tropical Cyclones Vance and Elaine.

Jim was the Regional Manager for Metro North for over 10 years and prior to that he was the Manager for the Midlands region.  Jim was the Director of Operations for the SES when he left FESA in 2001.  Jim finished his working life coordinating the Emergency Management for the Main Roads Department

Jim was held in very high regard and was well respected by both his colleagues in the SES/FESA and the SES Volunteers throughout the State.  The SESVA extends their condolences to Jims family – he will not be forgotten. 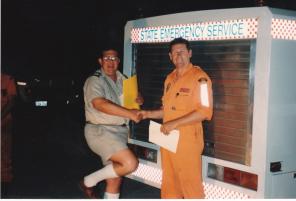