Christmas comes but once a year….

Perth CBD – 1930hrs, Saturday 7th December 2013. More than a quarter of a million mums, dads and excited kids all jammed onto St Georges Terrace to see the big event. For 1 ½ kilometres, all you can see is people and street performers, with a flash of orange here or there. Welcome to the 2013 Channel 7 The West Australian Christmas Pageant.  The Northshore SES unit has had a long affiliation with the Christmas Pageant, spanning dozens of years. Whilst the basics of the parade itself have remained pretty static, the roles and requirements of the SES have changed significantly over time:

In the early days, the SES carried out what could only be described as a ‘behind the scenes’ role, manning road blocks and carrying out other mundane tasks away from the main event and the public eye.  Jump to 2013 and the SES volunteers are on the street looking clean, smart & professional. The oranges are everywhere – in the throng & interacting with the crowd, at the start line & again at the finish line, and we now have shiny new SES vehicles escorting floats and ultimately leading the parade down St Georges Terrace.

Local Manager Northshore SES Nick Elliott said “The benefits to the organisation, from a public awareness perspective, are simply unquantifiable.  In the space of about 4 hours every single person at the event will see an SES volunteer in their oranges – that’s more than a quarter of a million people over a four hour slot seeing the iconic uniform with their own eyes  – the SES could not pay (nor wish) for a better opportunity to promote the organisation”.

But the benefits don’t stop there, as Nick continued to explain “Street announcers continually sing our praises to the crowds as we walk and drive up and down the streets, and television coverage of the event also means that the SES are beamed onto the TV screens in homes across the state.”  Generally the SES has a very specific role on the day, which does not include crowd control or marshalling (which is left to Channel 7 and RAC staff). The SES concentrates on the safety of the spectators, ensuring that excited children stay well clear of any vehicular traffic and/or the moving floats. Another particular role of the SES is to double-check each float before it is allowed to move off, to ensure that no child is playing hide-and –seek underneath it or its wheels.

Not everything can be planned for of course – and this year had its fair share of surprises, one of which Nick describes for us here. “I was in the ute slowly escorting a moving stage through the crowds. All of a sudden the passenger door flew open and a girl jump in, shutting the door behind her. The girl, who I thought to be one of the street performers, asked if it was OK to get a lift, and I of course said yes assuming that she must have been cold or tired.  My new passenger then winds down the window of the ute and starts waving to the masses on the side of the roads, and then I hear one of the street announcers loudly say “Everybody quickly look – there’s Samantha Jade sitting in the SES vehicle – everybody wave…” and there it was, Samantha Jade was sitting in the Northshore SES Ute…”

The Northshore SES unit truly values the relationship that it has developed with Channel 7 over the years in respect of the Christmas Pageant, but it goes so much wider than that. During the planning stages the unit works hand in hand with all the other major agencies such as WAPOL, DPI, Mainroads, Transperth and City Of Perth to ensure that every possible situation is covered and every risk minimised.   Interestingly enough, 2013 saw a much higher number of missing children reported than during previous years, but thanks to the DFES radio network and the large number of SES volunteers on the street, all were accounted for and reunited with their respective families within minutes of them being reported missing. 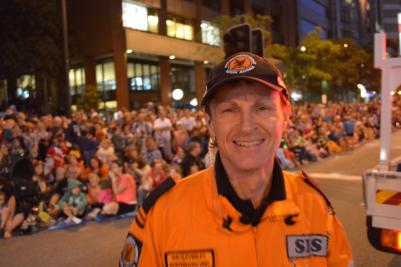 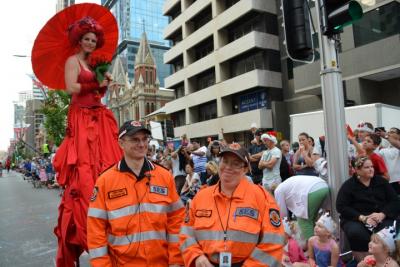 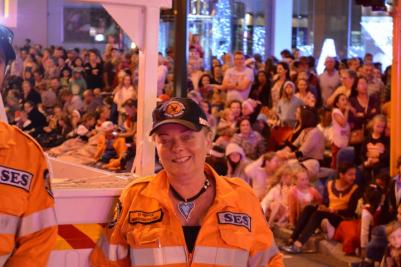