Who is who and when Update?
Here is an old photo I have found in my SES archive. Can anybody help with the names of volunteers, the activity and when?  Equipment hanging from Debbie’s belt indicates an early vintage Single Rope Techniques (SRT) activity.

Blue names indicates names found since this was first posted on 7 October.

I believe that Rod Paterson (past career and volunteer SES),  Jim Ridgwell (still an active volunteer at Gosnells) and Herman Hofman (still an active volunteer at Armadale) would have been the SRT instructors.  Bernie MacNamara (then SES Metro District manager) recalls the course in late 80’s early 90’s but would have to access training files to confirm. He also recalls that Debbie Carter may also have been an instructor.  Jim Ridgwell recalls the SRT course was held at a brickworks in the Armadale area.

Can you help identify these characters? 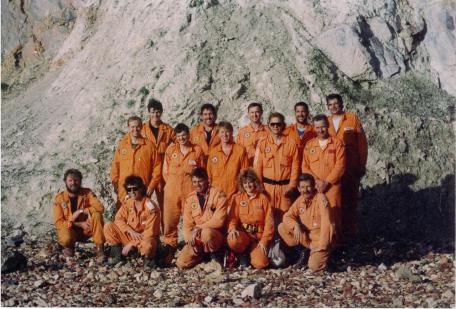