This news was recieved from Police Media.  We beleive at this time no SES Volunteers were involved in thses operations.
Roebourne Rescue 1
About 2:30am yesterday morning (25/06/13) our Police Operations Centre received a triple zero (000) emergency call from a woman stranded in flood water on the Great Northern Highway, about 70km east of Roebourne. The 56 year old woman stated she had no flotation devices with her and couldn’t open her car doors due to the water level.  Three police officers from Roebourne Police Station were recalled to duty and they immediately headed out to her location in a police four wheel drive vehicle. They located the woman’s Toyota Aurion still in the flood water and rescued her from it. They also pushed the Toyota out of the flood water.  The weather conditions were poor, with flood waters flowing steadily and a continuous heavy rainfall, and the rescued woman was taken back to the Roebourne Police Station. Due to the time of the incident accommodation arrangements could not be made, and the woman accepted an offer to shelter at the residence of the Office in Charge and his family.

Karratha Rescue
About 4:40am yesterday morning (25/06/13) we received information from the Department of Fire and Emergency Services and St John Ambulance that two men travelling in a van were trapped in flood waters on the North West Coastal Highway, just south of Madigan Road, Karratha.  Karratha Police attended and located the vehicle, and with the assistance of members of the public they towed the vehicle to safety. While responding to this incident they located further flood impacted areas, with the flood way just north of the Shell truck stop being approximately 1m deep, with a number of four wheel drives floating through the area. No one was found to be in life threatening danger.

Roebourne Rescue 2
About 3:30pm yesterday afternoon (25/06/13) a woman attended at the front counter of the Roebourne Police Station alerting officers to two people that appeared to be in trouble in flood waters at the Harding River near Woodbrook Road, which is about 1km from the police station. From what we have established so far the man and woman, both 24 years old, were travelling to Roebourne from the Ngurrawaana Community (near Whim Creek) with four children aged 1, 2, 6 and 10 years old when they came across the flood waters at about 3:00pm. Not knowing how deep the crossing was, they removed the children from the car and attempted to cross the flood waters, however about 50m through the car lost traction and floated out to deeper water. They were able to get free from the car, and became stranded, holding onto a tree. Officers from Roebourne and Wickham Police Stations attended, and the Department of Fire and Emergency Services (DFES) was contacted for assistance. The officers took with them rope and flotation devices they had taken to work after learning of the potential flood dangers.  The three officers attempted to walk out to the stranded pair, however after about 100m the water level rose to about chest height and it wasn’t safe to continue further. The officers then heard that due to the time it would take for other emergency services to attend, and the fact the pair needed to be rescued immediately, they were going to have to act immediately on their own to save them.  Two more police officers from Roebourne Police Station attended the scene, taking with them a boat owned by one of them. The officers used the boat to rescue the two stranded people and then also picked up the four children who were on the other side of the flood waters. The rescue was completed by 5:20pm. 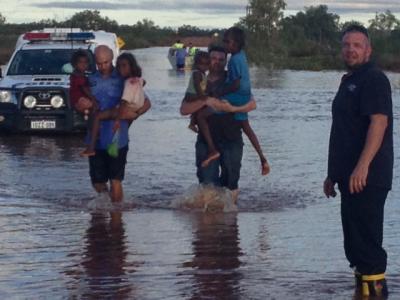 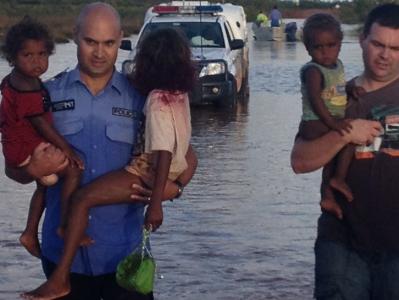