The second week in May was National Volunteers Week. During that week, the City of Gosnells recognised the contribution of emergency service volunteers at a thank you dinner, where the Mayor presented certificates of appreciation, including 6 volunteers from the Gosnells State Emergency Service for over 130 years of combined Service. One of those volunteers was Joe Taylor from Gosnells.  Last week recognition for Joe’s efforts continued when he was awarded the Emergency Services Medal as part of the Queens Birthday 2013 Honours List.

Joe has been a volunteer for 30 years and has served in many positions and on numerous occasions. He has filled the role of Media Liaison Officer during numerous Cyclones, a Field Search Controller for missing persons and a senior team leader for search and rescue operations. He has assisted in the development of courses and delivered them to many different SES units. He has served the community with distinction and can be relied upon in any situation.   The Emergency Services Medal recognises distinguished service by members (paid and volunteers) of emergency services across Australia, and people who are involved in emergency management, training or education. Eleven of these medals were announced, with Joe the only Western Australian from the State Emergency Services and voluntary emergency organisations.

“Between May and October each year, storms can bring damaging winds, heavy rainfall, flash flooding and storm surge to southern parts of Western Australia including the metropolitan area”, said Paul Hollamby, Local Manager. “Severe storms can include thunder, lightning, hail, flash flooding, tornados and gale force winds, and the best way to protect your home, family and business from these elements is to be prepared.”

It is worth remembering that volunteers would not be able to make this commitment without the support of their families and employers. 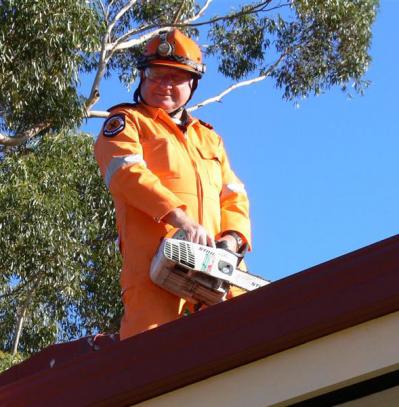