SES volunteer Johnathon Mcwaters  has been acknowledged by the WA Police for his assistance at a road traffic accident.   Following a road accident, Johnathon was driving by when he stopped and offered to assist Police Officer Chris Moore directing traffic. In an act of personal appreciation and that of the WA Police, Police Officer Chris Moore attended a training night at Armadale SES last week to present Johnathon with a certificate of appreciation.

The citation reads:  In recognition of your prompt, civic minded action at the scene of a traffic action on 29 January 2013 which enabled Police to continue performing their duties. Your actions on that day are to be commended and appreciated.

During the presentation Police Officer Chris Moore said that Johnathon had assisted him for five hours, a terrific assistance to a lone policeman and saved deploying other policeman away from other duties.

Great recognition by the WA Police and the SES volunteers at Armadale are very proud of you. The SESVA were also pleased to bring the policeman and SES volunteer together for the certificate presentation. 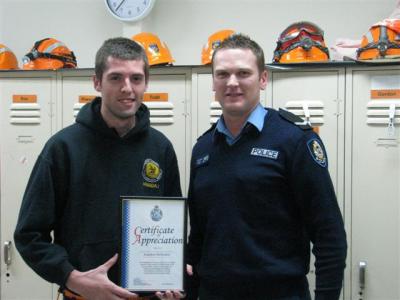