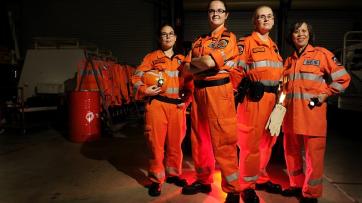 Bayswater SES mums Tamsin Collins, Andrae Moore, Nicola Wilkinson and Sonia Fixter. Picture: DANIEL WILKINS Source: PerthNow
NICOLA Wilkinson is a wife, a mother of four and a full-time corrections officer in the state’s prison system.  She’s also a volunteer for the State Emergency Services and spends 12 hours a week managing the Bayswater unit.  Ms Wilkinson, who has been with the SES for five years, is just one of the 2000 West Australians who give up part of their spare time to ensure their communities are looked after in disasters.

SES volunteers also carry out land searches and cliff and cave rescues. And in some remote areas, the SES is the first on the scene of car crashes.  Andrae Moore, 32, signed up to be a volunteer at 15.  “I joined because my family were a part of it. I saw what they did and what they learnt and how much fun they had while they were doing it while helping the community at the same time,” she said.  Ms Moore said it was important to set an example for her three children.  “Volunteering in general is important to show your kids how to be community-minded and that getting out there is a rewarding experience,” she said.

Grandmother Sonia Fixter, 62, said the SES team “were like a family” and always looked after one another.  “In 2010 after the big hail storm our house was badly affected,” she said. “We had water come into the family room, but there were over 100 calls to the SES so we only did the essential stuff as everybody needed help so we went to help other people. Three days later we had the time to clean up our own house.”

Tamsin Collins juggles her SES role with raising a 15-month-old child and a full-time job.  “I see my commitment to the SES as a long-time thing and give more when I can and less when I can’t,,” Ms Collins said.

Ms Basanovic said country residents were more likely to volunteer than city people.  “Most country people volunteer in a number of positions and they are the lifeblood of their communities,” she said.  “Particularly essential services such as ambulance and emergency services and things like that just would not be able to exist without the volunteers coming together and really working hard in regional areas.”  Ms Basanovic said more help was also needed for the Red Cross, Salvation Army, in animal care and school sectors, as well as to fill administrative roles at small sports clubs.

Volunteers throughout WA are donating more than 300 million hours unpaid time that is estimated to be worth $9.4 billion, up from $6.6 billion in 2006.

The most popular sectors are:

Ms Basanovic said parents with dependent children still accounted for most volunteers in the state, with corporate volunteering also becoming more common.  But she said it was people aged 18-34 who now made up more than 50 per cent of those registered with Volunteering WA.  “Contrary to what a lot of people say about young people, they are extremely generous and they want to make a difference and they are doing so in wonderful ways,” Ms Basanovic said.  “That’s been a growing phenomenon, particularly tertiary students.  “A lot of them are starting up groups of their own.”  National Volunteer Week starts Sunday.  More than 70 events are planned around the state, including the Department of Communities Volunteer of the Year Award on Wednesday.

Community Services Minister Tony Simpson said volunteers made an important contribution.  “Through your tireless efforts, volunteers and supporters like you make our communities stronger, richer and more vibrant,” he said.  BE INSPIRED BY PEOPLE PUTTING OTHERS FIRST.