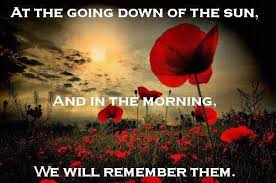 This ANZAC day many SES Volunteers, their family and friends will pause to remember those Australians who paid the ultimate sacrifice.  SES Volunteers across the State will attend their local ceremonies or join the march to pay their respect.

“They shall grow not old, as we that are left grow old;
Age shall not weary them, nor the years condemn.
At the going down of the sun and in the morning
We will remember them.”
Lest we forget

On 25th April 1915 a group of young Australian and New Zealand soldiers landed on the Gallipoli Peninsula, confronted by steep cliffs, hostile guns and the unknown.  It was the start of a gruelling campaign that saw gallantry, courage, bloodshed and sacrifice. And it marked a coming of age for two very young nations, who sent their young men across the globe to fight – many sadly never to return.

Now, none of the men who fought that war remain.    But their commitment to their nation has become symbolic of Australian values: mateship, common purpose and standing up for the principles we all share.  Those are the qualities we honour when we think of Anzac Cove almost a century ago.
And they are also the qualities we remember when we think of what followed in so many of the theatres of war where Australians fought. We think of the devastating battles on the Western Front.

And then World War Two: the air battles, the European campaigns, the jungle warfare in the Pacific and Burma.   We think of the Solomon Islands, Timor, the conflicts in Europe and the Middle East, PNG and Kokoda and this year in particular, we remember the Fall of Singapore.  And the campaigns that followed:  Korea, Malaya, Vietnam, the two Gulf Wars and Afghanistan. And we think of our Defence Force men and women peace-keeping in many other trouble spots, where they continue to work for freedom and democracy today.

It is 98 years since Australian and New Zealand soldiers landed on the Gallipoli Peninsula.  But as the years pass, something remarkable has occurred – our commemoration of ANZAC Day has grown stronger and stronger.  Now this is not a celebration of war, but a steady recognition of what is an essential ingredient of what has made the Australia of today: the quiet legend of the ANZAC.

When we pause on ANZAC Day, in the cool still of the dawn, we hear the sounds of the Ode, the bugle, and the gentle draw of the flag being lowered and raised, and at that moment, Australians are as one.   It is an emotional feeling.   And it is a sense of gratitude for all we enjoy today: the freedom, the tolerance, the stability of our system of government and the rule of law.

All might be so different without the commitment and legacy of our fighting men and women. Like many Victorians, on 25th of April, I think about members of my own family and the thousands of members of other families who have contributed to that vital part of Australia’s history.
Truly on ANZAC Day, we commemorate and honour the Legacy of the Brave.

What is ANZAC Day?
ANZAC Day – 25 April – is probably Australia’s most important national occasion. It marks the anniversary of the first major military action fought by Australian and New Zealand forces during the First World War.
What does ANZAC stand for?
ANZAC stands for Australian and New Zealand Army Corps. The soldiers in those forces quickly became known as ANZACs, and the pride they took in that name endures to this day.
Why is this day special to Australians?
When war broke out in 1914, Australia had been a federal commonwealth for only 13 years. The new national government was eager to establish its reputation among the nations of the world. In 1915 Australian and New Zealand soldiers formed part of the allied expedition that set out to capture the Gallipoli peninsula in order to open the Dardanelles to the allied navies. The ultimate objective was to capture Constantinople (now Istanbul in Turkey), the capital of the Ottoman Empire, an ally of Germany.
The Australian and New Zealand forces landed on Gallipoli on 25 April, meeting fierce resistance from the Ottoman Turkish defenders. What had been planned as a bold stroke to knock Turkey out of the war quickly became a stalemate, and the campaign dragged on for eight months. At the end of 1915 the allied forces were evacuated, after both sides had suffered heavy casualties and endured great hardships. Over 8,000 Australian soldiers had been killed. News of the landing on Gallipoli had made a profound impact on Australians at home, and 25 April soon became the day on which Australians remembered the sacrifice of those who had died in the war.
Although the Gallipoli campaign failed in its military objectives, the Australian and New Zealand actions during the campaign left us all a powerful legacy. The creation of what became known as the “ANZAC legend” became an important part of the identity of both nations, shaping the ways they viewed both their past and their future.
Early commemorations
The 25th of April was officially named ANZAC Day in 1916. It was marked by a wide variety of ceremonies and services in Australia, a march through London, and a sports day in the Australian camp in Egypt. In London over 2,000 Australian and New Zealand troops marched through the streets. A London newspaper headline dubbed them “the knights of Gallipoli”. Marches were held all over Australia; in the Sydney march, convoys of cars carried wounded soldiers from Gallipoli attended by nurses. For the remaining years of the war, ANZAC Day was used as an occasion for patriotic rallies and recruiting campaigns, and parades of serving members of the AIF were held in most cities.
During the 1920s ANZAC Day became established as a national day of commemoration for the 60,000 Australians who had died during the war. In 1927, for the first time every state observed some form of public holiday on ANZAC Day. By the mid-1930s, all the rituals we now associate with the day – dawn vigils, marches, memorial services, reunions, two-up games – were firmly established as part of ANZAC Day culture.
With the coming of the Second World War, ANZAC Day also served to commemorate the lives of Australians who died in that war. In subsequent years the meaning of the day has been further broadened to include Australians killed in all the military operations in which Australia has been involved.
ANZAC Day was first commemorated at the Memorial in 1942. There were government orders prohibiting large public gatherings in case of a Japanese air attack, so it was a small occasion, with neither a march nor a memorial service. Since then, ANZAC Day has been commemorated at the Memorial every year.
What does it mean today?
Australians recognise 25 April as an occasion of national remembrance, which takes two forms. Commemorative services are held at dawn – the time of the original landing – across the nation. Later in the day, ex-servicemen and women meet to take part in marches through the major cities and in many smaller centres. Commemorative ceremonies are more formal and are held at war memorials around the country. In these ways, ANZAC Day is a time when Australians reflect on the many different meanings of war.

The Dawn Service
The Dawn Service observed on ANZAC Day has its origins in a military routine which is still followed by the Australian Army today. During battle, the half-light of dawn was one of the most favoured times for an attack. Soldiers in defensive positions were woken in the dark before dawn, so by the time first light crept across the battlefield they were awake, alert, and manning their weapons; this is still known as the “stand-to”. As dusk is equally favourable for attacks, the stand-to was repeated at sunset.
After the First World War, returned soldiers sought the comradeship they had felt in those quiet, peaceful moments before dawn. A dawn vigil, recalling the wartime front line practice of the dawn ‘stand-to’, became the basis of a form of commemoration in several places after the war. There are claims that a dawn requiem mass was held at Albany on 25 April 1918, and a wreath laying and commemoration took place at dawn in Toowoomba the following year. In 1927 a group of returned men, returning from an ANZAC function held the night before, came upon an elderly woman laying flowers at the as yet unfinished Sydney Cenotaph. Joining her in this private remembrance, the men later resolved to institute a dawn service the following year. Thus in 1928 150 people gathered at the Cenotaph to for a wreath laying and two minutes silence. This is generally regarded as the beginning of organised dawn services. Over the years the ceremonies have developed into their modern form and also seen an increased association with the dawn landings on 25 April 1915.
Today dawn services include the presence of a chaplain, but not the presence of dignitaries such as the governor general. They were originally very simple and followed the military routine. In many cases, attendance at the dawn service was restricted to veterans, while the daytime ceremony was for families and other well-wishers. Before dawn, the gathered veterans would be ordered to “stand to” and two minutes’ silence would follow. At the end of this time a lone bugler would play the Last Post and then conclude the service with Reveille, the bugler’s call to wake up.
In more recent times families and young people have been encouraged to take part in dawn services, and services in Australian capital cities have seen some of the largest turnouts ever. Reflecting this change, those services have become more elaborate, incorporating hymns, readings, pipers, and rifle volleys. Other services, though, have retained the simple format of the dawn stand-to, familiar to so many soldiers.
The ANZAC Day Ceremony
At the Australian War Memorial, the ceremony takes place at 10.15 am in the presence of people such as the prime minister and the governor general. Each year the ceremony follows a pattern that is familiar to generations of Australians. A typical ANZAC Day ceremony may include the following features: an introduction, hymn, prayer, an address, laying of wreaths, a recitation, the Last Post, a period of silence, either the Rouse or the Reveille, and the national anthem.  After the Memorial’s ceremony, families often place red poppies beside the names of relatives on the Memorial’s Roll of Honour, as they also do after Remembrance Day services.