SES  volunteers remain on call this morning as storms continue to batter Perth and southern WA.  Strong squalls peeled the roof off  the three storey apartment block on West Coast Highway at about 5am.  No one was injured but  two lanes on the highway were closed between Brighton and Hale roads for several hours as SES volunteers worked to secure the building.  About 70 people from were evacuated to a nearby tavern.

SES received 24 calls for assistance from across the metropolitan area overnight since 5.30pm yesterday.  Most of the calls were for help to cover leaking roofs.  A severe weather alert remains in place for the metropolitan area, with rain and strong squalls forecast to continue throughout the morning. 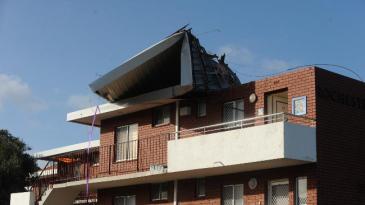