SES Volunteers has searched parts of Rottnest Island today following the discovery  of remains yesterday.  Police have confirmed that remains are human and are treating the case as a murder.  It is believed the remains are the head of an adult Caucasian male aged between 30 and 50. Police say the head is missing front upper teeth, and pathologists believe they were missing prior to the man’s death Investigations are underway to identify the victim.

Police say they will continue to search the southern side of the island over coming days, while divers will also search the surrounding ocean. A visitor to the popular holiday island stumbled across a plastic bag containing the head yesterday afternoon .Police say the bag had washed up on the shore of Porpoise Bay on the southern part of the island.

This afternoon an additional 16 SES Volunteers were deployed to the island to provide additional resources for an expanded search tomorrow.  The Volunteers come from a number of metro SES Units. 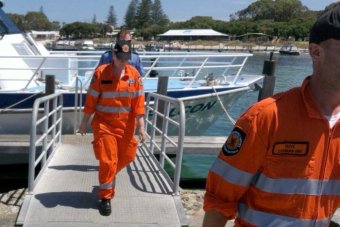 SES Volunteers arrive on the Island