The search for the missing boy is continuing this morning  after his quad bike was found by police late last night in bush near Beverley.  The 14-year-old boy went missing yesterday morning while riding his quad bike with his father near Metro Road and the Brookton Highway in Beverley, about 130km south-east of Perth.  Searchers found his abandoned quad bike late last night, but there is still no sign of the boy.

The boy has autism and cerebral palsy and grave fears are held for his safety.   The boy was camping with his father and friends near the Brookton Hwy and he was last seen at about 7.15am.

Teams of SES volunteers are assiting police searching the area using teams on foot and vehicles.  Due a ban by DFES SES quad bikes cannot be used.  The exact number of SES Volunteers and which units thay have been drawn from is not known by the SESVA.

Yesterday up to 50 State Emergency Service volunteers, along with local police, a fixed wing police plane and a police helicopter are scouring the area to find the youngster. The search area is dense bush 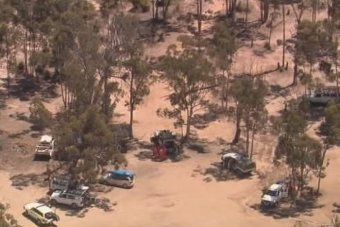 Fifty State Emergency Service volunteers, along with local police, a fixed wing police plane and a police helicopter are scouring the area to find the youngster.POLICE are becoming increasingly concerned for the welfare of a 14-year old boy who has gone missing while quadbiking in the Wheatbelt region of Western Australia.  The teenager was on his bike with a group near Brookton, about 140 kilometres southeast of Perth, at 9.30am (WST) on Sunday when he disappeared.  With temperatures soaring to close to 40C across the state, the boy is believed to not have any water with him.