Two volunteers from the Gosnells State Emergency Service (SES) unit were recently recognised for their efforts. The volunteers where notified on International Volunteers Day, and were presented the Hasluck National Volunteer Awards at a presentation evening last Monday.

Ken Wyatt, member for Hasluck presented the Long Term Community Service Award to Jim Ridgwell for over 30 years’ service.  Jim was heavily involved in the funding and construction of the current Gosnells SES building in the early 1980’s. He was also a key member of the State Vertical rescue team, which included deployment to Pannikan Plains for a Cave Rescue. He is still an active rescue team member and mentor to new members.

Mark Geary received the Emergency Management Award for his tireless pursuit to improve the volunteers capabilities, representing volunteers, collectively, on various working groups and committees. He is a key volunteer and leader, represented the State at a National Rescue Competition and being sent to Victoria to assist after major hail storms in 2010.  The commitment of Emergency Service volunteers cannot be understated, said Gosnells SES Local Manager Paul Hollamby. Mark and Jims efforts certainly deserve the recognition.

They sacrifice time with their families to help the community when disasters strike.  It is worth remembering that volunteers would not be able to make this commitment without the support of their families and employers. 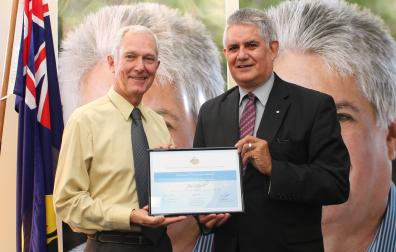 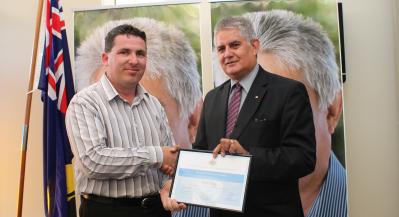