As part of National SES Week, the Department of Fire and Emergency Service (DFES) organised a “Thankyou” evening for some of the State Emergency Service (SES) volunteers and families. Volunteers from Gosnells, Canning, Armadale, Kalamunda and Mundaring SES units attended the event on Thursday evening.  The event was attended by Lloyd Bailey, Acting Fire and Emergency Service Commissioner, who, on behalf of the Queensland Government, presented medals to some of the SES volunteers involved in the Cyclone, Storm and flooding that affected Queensland in 2011.

These volunteers left their families and employers for 5 days to assist some of the communities in Queensland, and involved temporary repair and recovery tasks.  The medal has been given to all emergency services who contributed during and after storms, cyclones and floods in 2011, and included the hundreds of career and volunteers emergency responders from across Australia.

From the Gosnells SES Unit, Graham Fixter, Dyani Cobbold, Matt Pestell and Paul Hollamby received the medals. Connie and Peter from the Armadale SES Unit also received the medal.  SES Week was held between 12 & 18 November 2012, and is a national celebration of the dedication and commitment of the men and women who selflessly volunteer their time and energy with the State (and Territory) Emergency Service across Australia.

It is worth remembering that volunteers would not be able to make this commitment without the support of their families and employers. 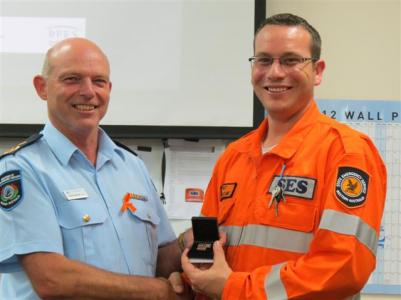