The Local Manager Nick Elliott welcomed all unit members as well as our District Manager Glenn Hall, with Nick reiterating to all present that, due to the recent restructure, the unit now falls under FESA Operations Metro North Coastal District.

Highlights from the evening were:

Nick Elliott presented his Local Manager’s report, with key points being:
Applauded all members for their efforts in operations and training during the past 12 months.

Deputy Local Manager Hazel Darkin presented what had become a unit highlight in recent years – the unit operations and training statistics, this year she covered all of 2011 along with 2012 year thus far. In conclusion Hazel stated that “We have already surpassed the number of member callout hours from last year with 4 months left of the year”.

Welcome Melanie Roberts and Carlo Restifo (back for a second year) as the unit representatives to the committee for the 2012/13 year.   Thanks to Ros Forward (past Training Officer) and Tamsin Collins (past committee member) for their efforts during their terms.

Other election results saw the 2011/12 incumbents standing unopposed and elected again for the 2012/13 year for the positions of Admin Officer (Di Williams) and Treasurer (Hazel Darkin). 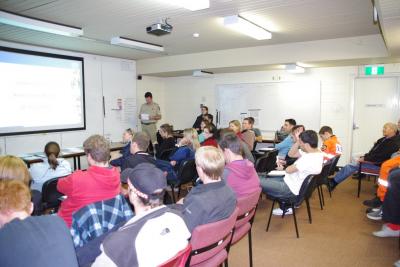 Nick Elliott (Local Manager) and members during the AGM presentations

At the conclusion of the AGM Glenn Hall FESA District Manager was invited to speak.  This was Glenn’s’ first unit visit since Northshore SES moved into North Coast District. Glenn spoke in general on his role and highlighted the vast changes in all aspects of the unit since his last unit visited several years ago.

After the meeting closed, the members retired for the traditional fellowship, consisting of pies, pizzas and a few beverages… 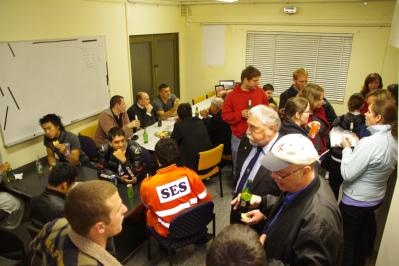 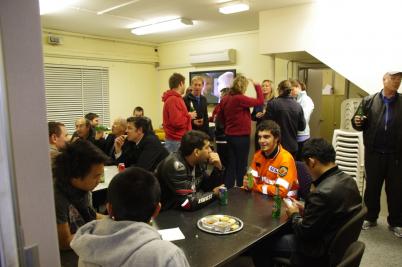