The State Emergency Service (SES) received 50 calls for help during and after the storm, mainly for minor damage to homes and fallen trees on patios.   SES Volunteer crews worked well into the night.  In the South West Witchcliffe, just south of Margaret River, recorded 43mm since 9am yesterday; Cape Naturaliste 33mm and Bunbury 27mm, with many centres receiving 20mm or more.

Further north, Dwellingup, 97km south of Perth, got 52mm; Bickley in the Perth Hills received a drenching with 65mm; Swanbourne 41mm and Jandakot 33mm. Perth city recorded 27mm and Perth Airport 31mm.  Strong winds buffeted most of the South West and the city with gusts recorded over 100km/h. Mandurah had a gust of 102km/h and Rottnest Island 96km/h.

Good rainfalls reached most of the Wheatbelt with farmers welcoming much needed rain to boost yields on all grain crops.  In the Central West, Dandaragan had 24mm; Badgingarra had 22mm, Mingenew 17mm; and Morawa 11mm, with Geraldton Airport recording just over 8mm. But much of the region received 15mm or more. 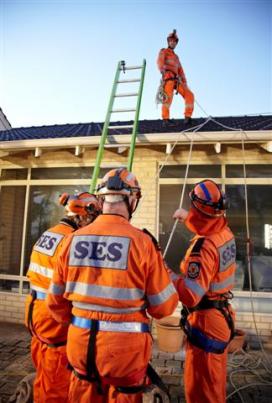