Over the last few months, the Northshore SES unit has introduced a number of initiatives to ensure not only the safety of their volunteers, but also, the ability of their volunteers to perform ‘as one’ during a search event. Nick Elliott, Local Manager of the Northshore SES, reports on some recent initiativies and provides exclusive insight to the WA SES Volunteers Association, in relation to these initiatives:

“In the period May – August 2012, the Northshore SES unit has taken delivery of three long awaited replacement vehicles, all of which benefited from better livery and beacons / LED’s than previous versions. When we took delivery of our truck, we identified risks straight away with the ‘batwing’ style doors. What we have done is to identify these risks, and to minimise them wherever possible”

One such example is noted below: 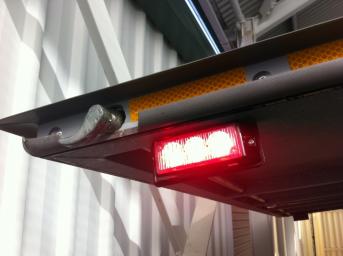 Installation of LED units, mounted onto the batwing doors, and integrated into the vehicles switched electrical system.

During the March 2010 storms, the Northshore unit identified that its members sometimes spent significant time on a public road / highway, at night, during bad weather, or possibly both. Since this time, our team has monitored the type of callouts we are receiving, and has taken a stance to minimise risk to our volunteers, by introducing a new (minimum) level of road safety equipment to each callout vehicle.” 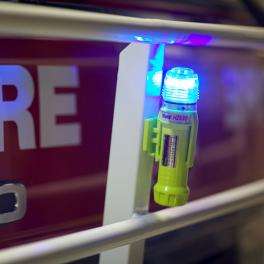 10 x Eflare EF532’s per vehicle, including all bases and clips 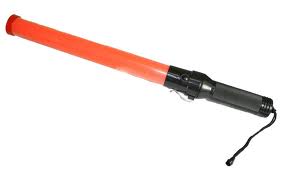 The Northshore unit chose the (old) Red/Blue EF532s due to their having 16 inbuilt LED’s – the brightest in the range. Dealing directly with the Eflare Corporation gave us a great hand in securing plenty of stock at very competitive prices.

Time and time again, we had members of the Northshore unit crawling within ceiling spaces or other small / remote areas as part of their callouts. In many of the cases, it was simply not practical (or possible) to source lighting from 240V AC or generator. Enter the PELICAN RAL system….

“The Northshore unit has invested in two PELICAN 9430 units. Delivering an amazing 2000 Lumens over an 8 hour period, they have proved themselves time and time again.” 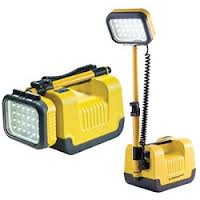 “It was during a search in 2011 that Northshore identified a serious flaw with the teams that we were turning out for searches. And that flaw was torches. Every member had a different torch that used different batteries. We had no control over whether the batteries were good, or whether in fact the torch actually worked. After prolonged debate, the Northshore unit now issues LED Lenser P7 torches to every member. This has made significant improvements to our operational ability” 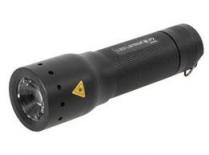 Every member now has the same small, yet powerful torch, as part of their standard PPE