A 75-year-old woman was seriously injured when a car crashed into the front bedroom of her Langford house.  Police were called to the Gale Street home about 11.20pm Saturday night where they found the injured woman.  Initially Ambulance, Fire and Rescue and Alinta Gas were also called to the property due to a gas leak.  Western Power also attended the scene to isolate power to the property. Police said it appeared the vehicle travelled from a neighbouring house, through a fence and into the front of the property.

The 19-year-old female driver was unhurt and inquiries are continuing.  The 75-year-old woman was in a stable condition in Royal Perth Hospital this morning and had been transferred from the scene before SES arrived.

Gosnells SES was called to the incident earlier Sunday morning.  Their first response was to conduct a hazard assessment and to assess the risks and damage and decide on a course of action.

Gosnells SES main task was to shore up the roof and assist the police secure her property.  Phillip Petersen one of the SES team members called to the scene said “If you consider the main electrical switch board and gas meter were located at the corner of the house that is no longer in existence, it could have been a very dangerous place to be. 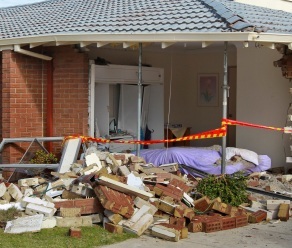