Over the weekend SES Volunteers SES assisted the Police Missing searching for missing Boulder bookkeeper Veronica “Ronnie” Messina.  Police believe her  shitzu dogs may be the key for detectives trying to find the 62-year-old who was last seen 15 days ago.  The search involved SES volunteers Mounted police, and detectives from Kalgoorlie and Perth scoured a 4squre km area of bushland, about 10km south of Boulder on the Goldfields Highway, on Saturday.

The search has so far centred on a truck bay near where Ms Messina’s two beloved shitzu puppies were found running loose on June 25, the day she was last seen.  Police said on Friday the location was “significant”, with Ms Messina’s Holden Commodore also believed to have been in the vicinity.  A number of abandoned mine shafts are also understood to be located in the area, which was searched from the air by police with a thermal imaging camera last Thursday night.
Ms Messina was reported missing by friends on June 28. 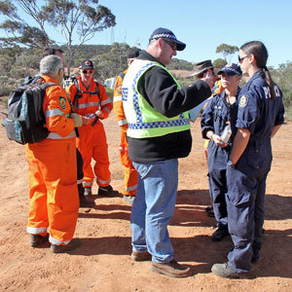