On Friday 29th June 2012 Northshore SES received a call to assist police at a Mosman Park apartment that had been destroyed by fire the day before. The blaze had started in a block of homeswest units on Gibbons Street about 4.30pm on Thursday 28th. The fires destroyed the ground floor apartment and severely damaged both apartments on the floors above.

Nick Elliott, Acting Local Manager Northshore SES, arrived at the scene on Friday afternoon to meet the WAPOL Sergeant so as to recon exactly what the SES would be required to do. Within minutes of arriving, Nick was made aware that this was not going to be any ordinary job.

A structural engineer had raised concerns in relation to the concrete slab above the apartment having been weakened due to the intensity of the fire that had occurred. So all that the Northshore team had to do was to install a few Acrow props inside the unit and that would be that. Easy? Not quite so….

Firstly, the entire apartment was deemed a virgin (untouched) ‘Major Case Forensic Crime Scene’, and secondly, the SES team would have to work intrinsically around the body without disturbing it, or any evidence that may lay around it.

So, the challenge was set. Nick assembled a team of 4 of Northshores finest, who were all briefed on scene by WAPOL and then led away to get suited up into full forensic gear; suits, masks, boots, gloves… the works.

Nick took a few moments to tell the story…

‘Due to the nature of the incident, we had to specifically select new and clean Acrow props as well as new clean timber spreader plates so as to minimise the potential for any contamination within the crime scene. An additional measure then saw the bases of the Acrow props being placed into new forensic bags which were then taped into place”

“So then the Acrow installation could began. Single line entry into the apartment saw the team using the same footstep marks to come and go. Once the location of an Acrow prop had been decided, a forensic photographer took a few close up pictures of the area, after which a forensic officer slowly cleared away the debris. When a small square of the correct size had had been cleared, the photographer took more close up photographs, and once confirmed OK, the Acrow prop was put in place”

“This process continued until we came to the room where the body lay. The biggest issue now faced by the team was access. Aside from the obvious, every inch of the room was covered in what could have been crucial forensic evidence. Working closely with the WAPOL Sergeant the team identified to possible locations for 2 No. Acrow props either side of the body. Installing them was unbelievably difficult… we were working at full stretch whilst leaning away from ourselves, we had nowhere to put our feet, and nothing to lean on… it was far and away the most difficult Acrow installation that I had even undertaken”

“Once all the Acrows were all in place, we withdrew to outside the apartment and used a 6m x 9m tarpaulin to create a  visual barrier between the crime scene and the houses next door. Job done!”

In the days that have followed there has been significant media interest in this incident.

The victim has been named as 31-year old Damian Noakes, and on Friday (8 days after the fire) WAPOL have arrested and charged a 28-year-old Padbury man with murder and criminal damage by fire.

“We learned an enormous amount from this callout” Nick said. “Not only was it a rare opportunity to fully utilise our SES ‘Preserving an Incident Scene’ training, but it presented a unique opportunity for us to work hand in hand with WAPOL and the major crime forensic team to great success”.

“At the end of the day, we didn’t do much, but the combined effort of everyone at the scene has resulted in a murder charge being laid after only 8 days, and albeit small, we are very proud of the part that we played in this incident.”

Some pictures of the incident: 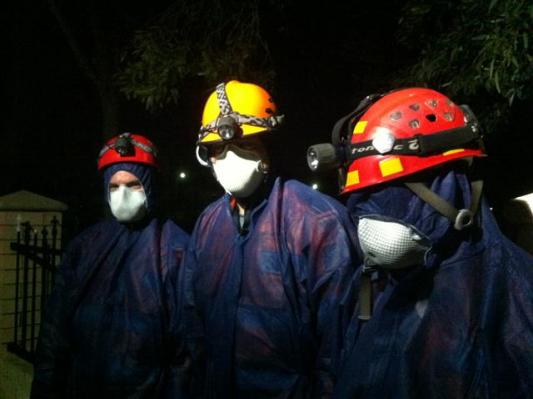