A really strong media campaign for Storm Awareness as been run this week. As part of the campaign there were a number of radio interviews with SES Volunteers and staff.  Hazel and Steve joined 94.5 and Glenn Hall was interviewed on the 6PR Nightline Program.  It was great coverage and really promoted the role of SES volunteers, particularly during storm incidents.

Also the campaign included a story on Channel 7 news on Friday, an article in the West on Saturday.  An interview on 6PR Nightline program on Monday and 94.5 breakfast show on Tuesday.  There were also interviews on several regional ABC radio stations and articles in Community Newspapers.

I would like to thank Elena Kane from FESA media who kept the SESVA informed of the Storm Awareness Week campaign and sourced the radio interview recordings and pictures.

The audio was provided by “6PR Nightline” and the “The Bunch Mix 94.5” and we thank them for their support. 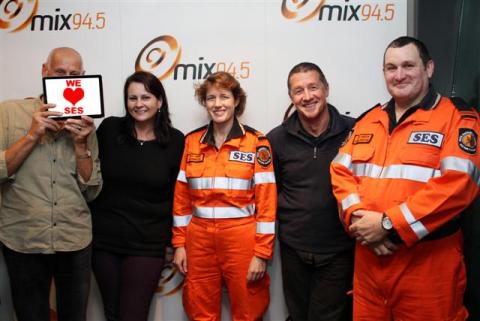 Hazel and Steve with the Bunch Mix 94.5 crew