At 65, Don Sonsee recently closed his 11-year career as chaplain at St John Ambulance.  But he had no intention of not continuing his lifelong commitment to serve others which began in childhood.  “When I was growing up my parents, Jack and Dot, would help a lot of people that were migrating from the UK,” Pastor Sonsee said.  “Many of them thought they were going to leave all of their problems behind, but they brought them with them.
“Our family was quite involved in the local church, but also involved in assisting people that were having a tough time in life. They worked with what was then known as the Good Neighbour Council, and they took in people who were having difficulties at home and in life. My parents felt that it was a genuine expression of their faith to show concern for others.

“Growing up in a family like that I was quite naturally drawn to the ministry – which is another word really for giving some positive help to people.”
After an eight-year career as a fitter and turner, Pastor Sonsee became an ordained Churches of Christ minister at 26, spending 27 years heading up ministries in Mandurah, Henley Beach in South Australia, Bruce Rock, Merredin and Inglewood.  With a desire to soothe the pain of people involved in major trauma incidents, he joined St John Ambulance.  “One of the most significant differences working in this field is that you are at the pointy end of people facing situations of acute need, from the people affected by the trauma, to their families and ambulance staff that are attending at the scene,” Pastor Sonsee said.

“I’ve spent quite a lot of time at most of the metropolitan hospitals meeting and greeting the ambos as they come in from a major incident such as a motor vehicle accident.”  On call 24 hours a day, Pastor Sonsee could never predict how his day would unfold, travelling across the metropolitan area and the State, sometimes within hours, to provide comfort to those on the front line.  “You might have a plan in the morning, but by the end of the day, that plan had long gone out the window,” he said. “A typical day might start with talking to people in the communications centre, which can be confronting – the people on the other end of the line are usually in differing degrees of distress.  “It could also involve contacting people who have attended a potentially distressing scene in the previous 24 hours to see how they are faring, or it might be talking to a couple about conducting their wedding.”

During his time at St John, Pastor Sonsee officiated at more than 60 weddings involving ambulance personnel, with about 50 per cent involving St John staff marrying each other. Along with feel-good situations, such as being involved in impromptu roadside baby deliveries, he counts these among the happy highlights.  But, he said, being able to help people in their darkest hour held a deep sense of purpose and satisfaction.  “There have been times when the situations have been quite traumatic, but you come away feeling good that you have been available for people in those tragic circumstances,” Pastor Sonsee said. “It feels good to know that people have been helped in an effective way.

“We’ve had situations with motor vehicle accidents where there has been a deceased person at the scene and that person is a relative of one of our ambulance officers who goes out to attend.  “In most of those cases, they arrive at the scene unaware of the person’s identity. In the country, this comes up a lot more as the towns are small and often the deceased person is someone they know. It’s particularly hard for the volunteers as they attend to people who are their friends, neighbours and relatives.  “I remember transporting a mum in my car from Joondalup Hospital to Princess Margaret Hospital, while the ambulance took her child who had drowned in a backyard swimming pool to hospital. That was a very long drive for her. Sometimes there is not a lot you can say, but you just need to be there with the person as a support.

“Being at a house where there has been the death of a child is always challenging. While you are there, more and more family members arrive. There was one incident where the grandmother was a central figure in the family and every now and then she would walk past me and give me a hug. In the end, she said ‘I’m just so glad that you’re here, it’s giving me the strength to support my family.’ So, she wasn’t giving me a hug, I was giving her a hug.”
During those difficult times, Pastor Sonsee draws on his own support structure, gaining comfort from his faith and his family.

“I have time out myself just to withdraw a little bit and reflect, which for me would include a prayer for the people involved as well as myself,” he said. “My wife Jill and my three sons are a great source of support, not so much talking about things, but just being there and doing lots of ordinary things together.
“There’s also a little group of chaplains, we meet every six weeks or so. We call ourselves ‘The Trauma Chaplains’. Among them is the Fire and Emergency Services chaplain, the naval chaplain, the speed race chaplain and one that works with a funeral director. We don’t talk shop, we just have breakfast and a chat.

“It’s been a very diverse, challenging and stimulating part of my ministry. It’s been a tremendous journey.” 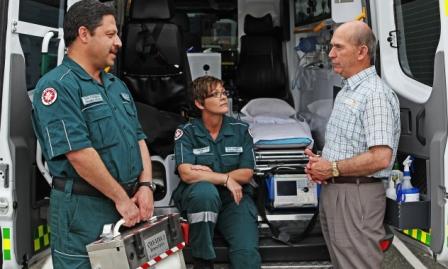