Low-lying parts of Perth are dangerously susceptible to storm surges and would have been flooded if cyclone Bianca had hit the city as predicted last year, a leading tsunami expert has warned.  Charitha Pattiaratchi, head of coastal oceanography at the University of WA’s school of environmental engineering, said Perth narrowly missed a “grave disaster” in January last year when cyclone Bianca dissipated before crossing the coast.

Professor Pattiaratchi, who is also co-ordinator of the Indian Ocean tsunami alert system, said a direct hit from the category-three system would have brought wide-scale flooding and swamped the Esplanade train station.  Illustrating his point, Professor Pattiaratchi said while water levels 1.6m above average had flooded the lower reaches of the Swan River, cyclone Bianca had been expected to cause water levels 2.3m higher than normal.  Perth’s highest recorded water level was 1.98m in 2003. But he said authorities were unlikely to have learnt anything from the experience and lamented how governments were typically complacent in the absence of a catastrophe.

“WA and Perth came very close to having a grave disaster last year with cyclone Bianca,” Professor Pattiaratchi said at a UWA Oceans Institute lecture.  “All of the train station would have been flooded but the cyclone disappeared four hours before it was due to hit.  “If that had happened we would have been looking at a completely different proposition now.”  Professor Pattiaratchi predicted Perth was “overdue” for a direct hit from a cyclone and said it was unlikely the city would escape with as little damage as it did last year.

Garry Baverstock, an environmental architect who has been carrying out work for the Town of Cottesloe modelling the effects of sea level rises, backed Professor Pattiaratchi’s warning.  Mr Baverstock said if Perth was affected by another cyclone that coincided with unusually high tides and forecast sea level rises upwards of 50cm, the city could be faced with a “wall of water effectively as high as a tsunami”.  The Public Transport Authority said it would shut down and evacuate the Esplanade train station in the event of “large-scale flooding”, conceding its pumping equipment could not cope. Did you know? 2.3m The expected height of the storm surge from cyclone Bianca in January last year 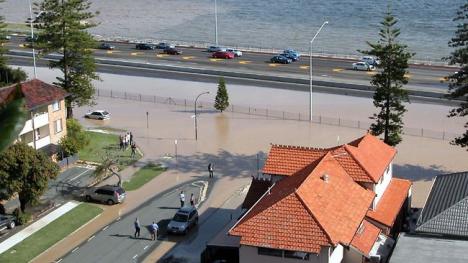