A teenager has been winched to safety after becoming stranded on a cliff at Ellendale Pool near Geraldton.  The State Emergency Service says the boy was climbing up a ledge above the pool on Saturday afternoon when he fell.  Fifteen State Emergency Service Volunteers worked hard to gain access to the boy who was stuck in an unstable area of the cliff and carryout the rescue.  The boy was placed on a stretcher and lowered down to the foot of the cliff before being winched to safety by the rescue helicopter. He sustained minor injuries and was flown to Geraldton Regional Hospital for treatment.

SES Volunteers are extensively trained in the following aspects of Cliff Rescue: 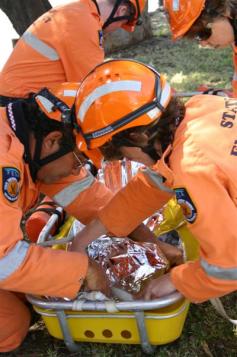 SES Volunteers Securing patient to a stretcher in a training exercise