Cyclone Heidi bears down on Pilbara

“Tropical Cyclone Heidi is moving in a southerly direction towards the Pilbara coast, and is expected to produce gales with gusts to 100km/h in coastal areas from Sandfire Roadhouse to Port Hedland this morning, extending west during the day, possibly as far as Mardie,” the bureau said.  A bureau spokesman said gusts could increase to 120km/h as Heidi crosses the coast, after which it should weaken.  The strongest winds and heaviest rainfall are expected to the east and south of the system.

Rainfall in excess of 100 millimetres are possible across the central and eastern Pilbara.  People in or near coastal and island communities between Pardoo and Mardie, including the communities of Pardoo, Port Hedland, South Hedland, Whim Creek, Roebourne, Pt Samson, Karratha, Dampier and Mardie are being urged to prepare for cyclonic weather and organise an emergency kit including first aid kit, torch, portable radio, spare batteries, food and water.

The SES said it was working closely with Main Roads, Local Government and Department of Health to minimise the impact on the community.  A number of roads are closed in the Shire of East Pilbara, Shire of Ashburton and Town of Port Hedland. 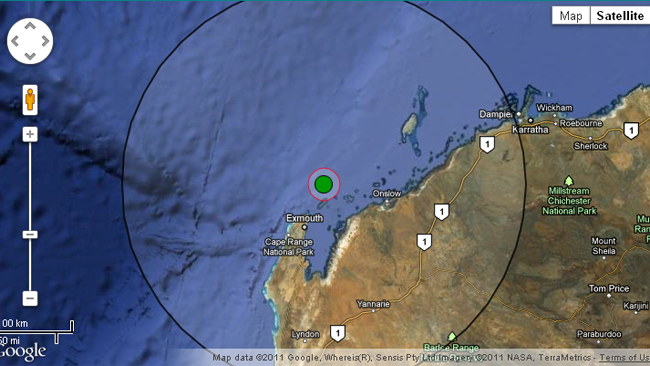 IRON ore exports from Port Hedland have been disrupted for the first time this season by cyclone activity, with the port being closed early this morning as miners shut down mining activities.  Port Hedland exports about 700,000 tonnes of iron ore a day, worth just under $100 million at current prices.  A cyclone warning has been issued for coastal areas from Sandfire to Mardie, including Port Hedland, Roebourne, Karratha and Dampier.

In a noon update, the weather bureau said Tropical Cyclone Heidi is estimated to be 185km north northeast of Port Hedland and moving south at 15km/h towards the Pilbara coast.  It could produce gusts of 155km/h in coastal areas, extending west during the day, as well as heavy rain and a dangerous storm tide.  Karijini National Park has been closed due to flooding and further cumulative falls of 100 – 250mm or more are expected over the next two to three days, the Bureau said.

Port Hedland Port Authority (PHPA) began clearing the port late yesterday afternoon, ordering eight vessels moved from their berths and clearing another 21 ships from anchorage off the coast.  PHPA formally closed the port at 2am today, ahead of the expected arrival of strong winds, and isn’t expected to authorise a reopen until the system passes and operations can be safely resumed.  Mining companies in the region are also reporting some disruptions to their operations, though mostly at the port side.

A spokesperson for Fortescue Metals Group advises that the company has moved non-essential port and construction workers out ahead of the arrival of Heidi, and has tied down its port-side operations. Construction work on the company’s new port infrastructure has also been pulled up.  Despite heavy rainfall over the past two days work is continuing at FMG’s major mining hubs, which are further inland and not the subject of cyclone warnings.  Rio Tinto said has not yet been forced to cease onshore work at its port operations at Cape Lambert, though it has cleared the port of heavy vessels.

The company’s Dampier Salt subsidiary, just outside of Port Hedland, has ceased operations and workers are in the final stages of tie-down ahead of the approach of Heidi.  Atlas Iron managing directory David Flanagan said the company had stopped mining at its Pardoo mine due to heavy rain, with operations not expected to resume until late tomorrow.

“We always take a conservative approach to managing our operations in extreme weather situations,” a BHP Billiton Iron Ore spokesperson said about its extensive North-West operations.  “We monitor all cyclone activity closely and shut in operations if we believe that is the safest course of action.

“We do not intend to give a daily update on the status of all our operations, but if there is any material impact on our production, we will report it in our quarterly production report.”  Gas giant Chevron has initiated cyclone readiness plans relating to activities on Barrow Island and in Onslow as a precaution.

“Onslow-based personnel involved with the Wheatstone Project are being demobilised,” a Chevron spokesperson said.  “Non-essential personnel working on the Atwood Osprey drilling rig have been demobilised.”  Meanwhile, The Australian has reported that Woodside Petroleum has halted production at several oilfields off the North-West coast because of Heidi.  Production halts were called on its Cossack, Wanaea, Lambert and Hermes oilfields on the North West Shelf, as well as the Vincent field off the North West Cape, Woodside said in a statement.  And Australian gas major Santos said Heidi had forced it to shut down production at its Mutineer-Exeter oil field.

The Qantas flights affected are QF 1114, QF 1115, QF 1116 and QF 1117.  “All of those flights have been cancelled,” Qantas’ spokesperson said.  “We’ve provided, for stranded passengers, one night’s accommodation and we’re currently calling all impacted customers.  “We anticipate we’ll be able to get everyone back on their journey tomorrow.”

A RED alert has been sounded for Port Hedland residents tonight as Cyclone Heidi closes in and storm surges threaten to inundate low lying parts of the town.

At 6pm, the Bureau of Meteorology issued a red alert for coastal and island communities between Pardoo and Whim Creek, including the communities of Pardoo, Port Hedland, South Hedland and Whim Creek.  People in these areas should move to shelter immediately if they have not done so already.  Evacuation of residents in low-lying parts of Port Hedland to emergency shelters began earlier this afternoon after the SES issued an emergency warning as Cyclone Heidi intensified.

FESA warned that rapid and powerful flooding is likely as a result of dangerous storm tides tonight as Tropical Cyclone Heidi approaches the Pilbara coast.
A relocation point at the JD Hardie Centre on Cottier Drive in South Hedland and people moving to the centre are advised to bring bring non-perishable food and temporary bedding for their family.

At 5pm, the tropical storm was a Category Two system about 115km north-north-east of Port Hedland and 265km  north-east of Karratha as it moves in a south-south-west direction towards the coast at 12km/h.  The cyclone is packing winds gusts of up to 140km/h near the centre  A cyclone warning is now current for coastal areas from Wallal to Dampier, including Port Hedland, Roebourne, Karratha and Dampier, and extends to adjacent inland parts.  The cyclone warning from Sandfire Roadhouse to Wallal has been cancelled. Once the cyclone hits land it is expected to be downgraded to a Category One storm again.

The heaviest rainfall is expected to the east and south of the system, with rainfall totals of up to 250mm possible across the central and eastern Pilbara. It is the first cyclone of the season expected to hit land and the second to form off WA’s coast since the season began on November 1.

Perth Ariport advises passengers planning travel to or from the north-west of Western Australia that some flights have been cancelled due to the cyclone.
Flights affected include those to and from Cloudbreak, Port Hedland and Karratha.  Passengers should check with their airline for the most up-to-date information on flights to and from this area.

Port Hedland Port Authority spokesman Steed Farrell said the port had activated its cyclone contingency plan at 4pm (WST) yesterday in preparation for the wild weather.  “We cleared inbound traffic into the port and cleared the port of vessels that needed to get out,” he said.  “There was enough risk to activate the plan and all non-essential staff will go home.”  Mr Farrell said the port would wait for word from the weather bureau before resuming operations.

The weather bureau says little to no rainfall has been reported in the area during the past 24 hours, but very heavy rainfall is expected later today and overnight in the river catchments between Port Hedland and Karratha.  Up to 250mm of rain is possible across central and eastern Pilbara with isolated heavier falls near the coast, the bureau says.  Moisture from the cyclone is expected to spread south triggering showers and thunderstorms over the Gascoyne, Goldfields and Central Wheatbelt, according to the Weather Channel.

The Weather Channel’s meteorologist Dick Whitaker said most of WA, except for the far south, will be soaked.  “Rain will continue through northern and central WA on Thursday and Friday as Heidi moves further inland and weakens. Further heavy falls are possible, particularly across the Pilbara,” Mr Whitaker said.   “Across the weekend, rain will mostly clear from the north but will continue over central regions and also spread to the south coast as the remnants of Heidi head down the west coast.”

“Over the coming week, most of northern and central WA can expect over 50mm of rain but parts of the eastern Pilbara and Goldfields should see over 100mm.  “The drenching may come as a surprise to the Goldfields and Gascoyne where January rain averages only about 25mm.”

The latest advice from the Bureau is that destructive winds with gusts to 155km/h are possible overnight close to the cyclone centre between Whim Creek and Pardoo, including Port Hedland.  Gales with gusts to 100km/h are expected in coastal areas east of Whim Creek this afternoon and evening, and may extend west to Dampier overnight if the cyclone takes a more southwest track.

Residents in and near Port Hedland and east to Wallal are specifically warned of the potential of a dangerous storm tide as the cyclone centre crosses the coast overnight.  Tides are likely to rise significantly above the normal high tide mark with dangerous flooding of low-lying areas, and tides elsewhere in the Pilbara should also be higher than normal.

WA is currently experiencing La Nina conditions, where lower sea surface temperatures in the Pacific Ocean create a see-saw of pressure, triggering thunderstorms and cyclonic activity.  Coastal communities between Broome and Exmouth face the highest cyclone risk of anywhere in Australia.  The bureau predicted in October that two cyclones will hit the WA coast, with a “significant risk” of at least one severe tropical cyclone impacting WA this year.  The first cyclone this season was a category three storm called Tropical Cyclone Alenga, which formed near Cocos Island in early December.

RED ALERT: People in or near coastal and island communities between Pardoo and Whim Creek, including the communities of Pardoo, Port Hedland, South Hedland and Whim Creek need to go to shelter immediately.  There is a threat to lives and homes. You are in danger and need to act immediately.

State Emergency Service advises you to:

If you are living in a caravan or structure that was built without Town of Port Hedland approval you should not shelter there. You need to relocate now.  The Department for Child Protection has set up a relocation point at JD Hardie Centre, Cottier Drive in South Hedland.  People relocating to the centre should bring non-perishable food and temporary bedding for their family.  Be aware that only essential items can be taken into welfare centres – alcohol and pets, except guide and assistance dogs, are prohibited.

BLUE ALERT: People in or near coastal and island communities between Whim Creek and Dampier, including the communities of Roebourne, Pt Samson, Karratha, and Dampier need to prepare for cyclonic weather and organise an emergency kit including first aid kit, torch, portable radio, spare batteries, food and water.

Several roads are closed in the region, including: