An SES Volunteer who helped residents escape last year’s flood disaster at Theodore in Central Queensland has been killed in a tragic accident at the town’s fire station.  It is understood the 28-year-old mechanic was called to the fire station on Friday night to work on a truck that had broken down.  It is believed he was working under the vehicle when a senior officer at the station started the truck, reversed out and accidentally crushed him.

Former Councillor Ron Bock says the man was a valuable member of the local State Emergency Service, who helped evacuate Theodore when the Dawson River peaked after Christmas last year. “He would have been one of the last to leave. I remember seeing him at this time last year and he was absolutely exhausted. He put in a terrific effort,” he said.  Ambulance paramedics tried their best to save him but the man died.

“It is hard to believe – the young bloke grew up here in Theodore and he has been a wonderful member of our community,” Mr Bock said.  “He has always been involved in the SES[it is] just so sad. His mum and dad live here and still find it hard to believe that anything could have happened like this.”  Mr Bock says the man – and his wife – are well known and liked throughout the community.  He says tonight’s New Year’s Eve gatherings will be sombre.

“We’ve all been hoping that midnight tonight would have ushered in a wonderful new year for us and it hasn’t been much of a year at all,” he said.  The man’s brother is a member of the local fire service.  Police are investigating the circumstances and now preparing a report for the coroner. 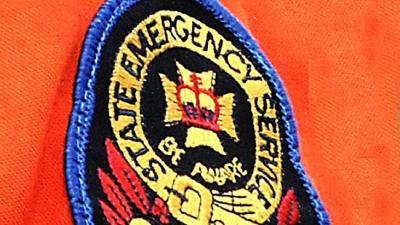