Melbourne mops up after wild Christmas storms.  State Emergency services are facing a major clean-up today after Melbourne was hit by severe storms and tornadoes yesterday.  Flash flooding and hailstones – some the size of cricket balls – have damaged buildings and cars as the storms swept through Melbourne and country Victoria.

Two tornadoes also wreaked havoc in Melbourne’s outer-west.  One of the tornadoes, in Fiskville, north-west of Melbourne, was powerful enough to upend cars.  It is believed another tornado also struck Melton, in north-west Victoria, which was one of the worst-hit areas.
Northern Melbourne suburbs of Eltham, Broadmeadows and Keilor were among the worst suburbs hit, with the SES deploying extra resources today to clean up those areas they have recieved over 3000 calls for assistance.  The damage bill is expected to be in the tens of millions.

The highest rainfall total was recorded in Greensborough, also in the city’s north, where 92 millimetres fell.  Melbourne resident Dominique Divalentino says his car was destroyed by the hail.  “Suddenly tennis ball-sized hailstones came crashing down, like meteorites, just came slamming through the car,” he told ABC News 24.  “It just destroyed the whole car.”

Another Melbourne resident described the hail as like “shotguns”.  “I’ve never heard anything like that in my life before. Like shotguns going off from everywhere – millions of them,” he said.  Lola Johnson, who also lives in Melbourne, told ABC News 24 part of her roof collapsed.  Suddenly tennis ball-sized hailstones came crashing down, like meteorites, just came slamming through the car.  Melbourne resident Dominique Divalentino

“I just thought I was in Cyclone Tracy. Years ago – I can remember that,” she said.  Some crew members in today’s Sydney to Hobart yacht race have been stranded in Melbourne because the severe thunderstorms stopped planes leaving the airport yesterday.  Crews from Calm, Scarlett Runner, Living Doll and Chutzpah were stuck at Melbourne Airport last night and many are now driving to Sydney or trying to get early morning flights to make it in time for the 1:00pm AEST start.

State Emergency Service spokesman Lachlan Quick says many volunteers have had their Christmas break interrupted because of the storm.  “We’ve seen widespread damage including smashed skylights, smashed windows, lots of damage to roofs forcing rainfall through,” he said.  “We’ve had reports of lots of vehicles with front and back vehicles smashed.” 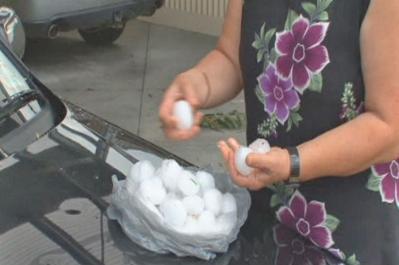