State Emergency Service volunteers have been banned from using quad bikes after an independent risk assessment declared them too dangerous.

The following article appeared in “The West Australian” Friday the 16th of December 2011 page 17. 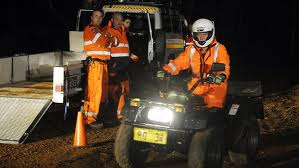 The Fire and Emergency Services Authority ordered the inquiry in light of safety concerns raised by internal reviews and the deaths of 84 people in quad bike accidents nationwide between 2000 and 2007.  Chief executive Wayne Gregson said use of the 11 all-terrain vehicles had been temporarily suspended and other options would be considered after the Chamber of Commerce and Industry found there was an “unacceptable risk to the operators”.

But the SES Volunteers Association says there have been no serious injuries or deaths in the 12 years that volunteers have used the vehicles for searches or to move equipment and supplies during floods, storms and other emergencies.  “Our belief is that the correlation (to civilian injuries or deaths) is not valid because they’re not trained . . . but our volunteers have to do a lot of training before they can ride the bikes,” SESVA WA president David Price said.
“We want a review of the risk assessment and we hope it will be done with more of an emergency service frame of mind because everything we do is dangerous.”

Mr Gregson said the safety of personnel and the community was a FESA priority and it would now look for suitable replacement vehicles.  Mr Price said one option the CCI suggested was a side-by-side vehicle that carried two people and was like a small utility.  He said it was not as practical as a quad bike and when the SES tested it, it could not carry the recommended load of two people, was poorly powered and kept getting bogged.

Mr Price said the emergency services started using quad bikes during the Moora floods in 1999.  He said quad bikes were useful for searching big areas quickly, including bush tracks, beach dunes and areas that bigger vehicles could not access and could be mobilised quicker than horses and search dogs.
WA Police also have a fleet of all-terrain vehicles and instructors. Only officers who have done the training course can ride the bikes.
It is understood police will not stop using the bikes.  A police internal review of its training course this year found the training, with its strong safety focus, was more than adequate.

The President of the SESVA has responded to FESA with the following letter:

The author of the risk assessment has little or no idea on how Emergency Service people perform their tasks and duties.   In fact the report is not at all evidence based within the context of Emergency Services.  The Volunteers of the State Emergency Service of WA are currently not covered by the 1984 OH&S Act or Worksafe WA.

There is an expectation for SES Volunteers to risk their lives performing their duties.   This is defined in the ‘LIFE ENDANGERMENT” Clause within the National Medal standards.  The SESVA was informed by the ACOO SES Metro and other FESA staff that the independent risk assessment was to be conducted on the ATV’s. This assessment was in relation to the need for a Roll Over Protection System (ROPS).

In the introduction and objectives of the report there is no mention of ROPS.  After reviewing the risk assessment, the SESVA reject the findings of the report and are of the opinion that the briefing for the report was given to meet a pre-determined outcome.

The practical review of ATV’s and a side by side, which was conducted with SES personnel at Warton Rd Police training ground, found that the Polaris 2 seater long wheel base ATV not only met, but exceeded the requirements of the service.  The author gave an “Extreme” (M5) rating within his summary and recommendations.   The process of a risk assessment is an exercise in “what if” but failed to accept the fact that the service has had no serious incidents within 12 years of operation.

The author of the report listed three events from the past 12 years operation of ATV’s in the State Emergency Service;

1.    A Mundaring search with a roll over, but no injury, which was more than ten years ago,
2.    A training event with a chipped tooth and,
3.    Another training event which resulted in a Police Officer breaking his arm.

This last incident we totally reject as this was a WA Police training activity and involved a police officer. No SES volunteer or FESA staff were involved in that event.   Further to this, the report actually demonstrates that without any training policies or procedures in place the risk is extreme. The report refers to the farming industry which had 84 deaths over seven years.

The SES volunteers have a thorough training and operational procedural regime which has mitigated the risk and caused one minor injury (chipped tooth) over 12 years.  The volunteer’s Association reject this report fully and demand that the risk assessment be reviewed with people that actually work in the emergency service area and have an understanding and experience of the SES Volunteer role.

Any further assessment must be evidence based and acceptable to the SES Volunteers and the Association.