The Attorney-General’s Department has released the free DisasterWatch phone app to improve access to disaster information, and help reduce call volumes to Triple Zero (000) during natural disasters. This project received National Emergency Management Program funding for 2011-12. Australians currently own more than 4.5 million smartphones. This technology has grown rapidly in Australia in the last twelve months — by 2013 it is expected that more people will access the internet via mobile devices than via desktop computers. Mobile applications can help people access government services and data, creating innovative ways to use information and deliver services to citizens.

On 29 July 2011, the Attorney-General Robert McClelland announced funding for the development of a national smartphone application. ’Nearly half of all calls to Triple Zero are non-urgent calls and when a disaster happens, calls are often requests for information about the disaster,’ the Attorney-General said.

The DisasterWatch phone app contains information about disaster events in Australia via direct feeds from a range of authoritative sources in the States and Territories and nationally. The information will be regularly updated. By reducing non-emergency calls, the vital Triple Zero Emergency Call Service can respond to those with a need for a police, fire or ambulance emergency response.

Please note: this app does not provide direct emergency alert warnings to users.

DisasterWatch is available from the Android Market and from Apple-iTunes (search for DisasterWatch). In the following months, the project team will engage with the community and the emergency management sector to gather feedback and ideas for new versions of the app. 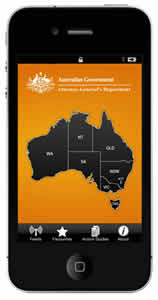