The Broome Unit of the State Emergency Service is looking for lots of new volunteers after a major upgrade to its headquarters and facilities on Orr Street.  In Broome last week, Emergency Services Minister Rob Johnson commended volunteers for their efforts in assisting the Broome community and neighbouring regions affected by record floods in March.  More than $100,000 in upgrades, including a new training room with electrical upgrades, operations centre and manager’s office, are expected to improve the response to emergencies including cyclones, floods, land searches and rescues.

“As we move into another wet season, it is important that we support our SES personnel in the Kimberley by giving them access to the most up-to-date equipment and facilities,” Mr Johnson said.  Broome SES logistics officer Craig Starcevich said volunteers had assisted in the design and build of the new facilities, giving up their time after work to help.  Aesthetics and landscaping were finished with a series of busy bees.

“The team at KJ’s Construction effectively built the alterations at cost to help support our volunteer unit. This enabled us to stretch our small budget and all this would not have been possible without their generous involvement,” he said.  Mr Starcevich said the SES was now actively seeking new members to train in the modernised facilities and all ages and genders were welcome.  At present, only up to 15 volunteers out of Broome’s population of more than 15,000 people attended regularly, making the region seriously understaffed for emergencies.

Volunteers would be trained in all aspects of search and rescue operations, storm and cyclone damage clean-up, cliff rescue, first aid, 4WD and quad bike training and communications.  “We need people who have just two hours spare every Monday at 7.15pm to train with us,” Mr Starcevich said.
Call 0417 937 073 for details. 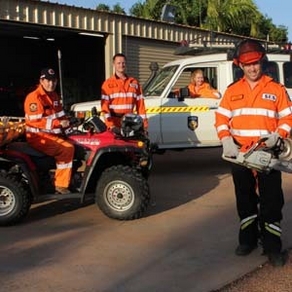