Hi SES Volunteers,
I am still continuing my holiday, on the homeward run down the WA coast. Since my last report from Kununurra, I have now reached Coral Bay.
My trip has taken me to:

Whilst at Broome, I popped into the Regional FESA-SES office and had a catch up coffee with District Manager “BJ”. Unfortunately I was unable to catch up with any of the volunteers.

At Port Hedland I had a chat with SES volunteer, Adrian Hatwell. The meeting with Adrian was a coincidence as we were having our UHF CB radios checked at NORSAT Communications, when Adrian introduced himself to us. (It was found that Jim’s UHF CB had a Tx failure with was quickly resolved with a loan radio). The Port Hedland unit was holding its now annual fund raising Orange Ball the following night. However I was travelling on, so not able to partake.

At Karratha, I was able to meet up with some of the volunteers who had just completed an air observer update course that morning.  It’s been some years since I was a volunteer at this unit, 1985-1990 and it brought back some fond memories. This unit had helped me develop in my skills range including leadership experience with road crash rescue and cyclones.

On my way from Karratha, I experienced a blowout on my caravan. Fortunately, my van is a dual axle and there was no danger except for the loss of a tyre and rim. The wrecked tyre tread was tangled around a suspension link, but came free after some grunting and few words of encouragement.

My travelling companion, Jim Ridgwell (Gosnells SES) decided to have a catch up with Darren Brooks (Exmouth SES). You may recall that these guys were both involved the Pannikin Plains cave rescue which instigated a recent Hollywood adventure movie. They both had a memorable meeting recalling the early days of SES vertical and cave rescue. Both Jim & I visited the Exmouth unit on a training night. They were using their new purpose built climbing tower. This was built from EMA and Lotteries grants. The unit is very experienced in vertical and cave rescue. Darren has been involved in the FESA review of vertical, cave, confined space and building rescue skills and tools, a review that has taken 5 years with outcomes only just being released for review. 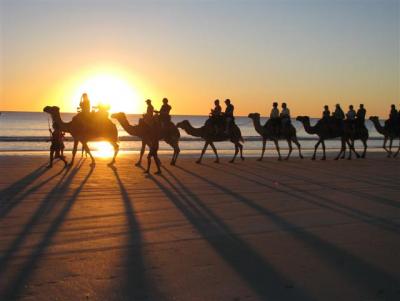 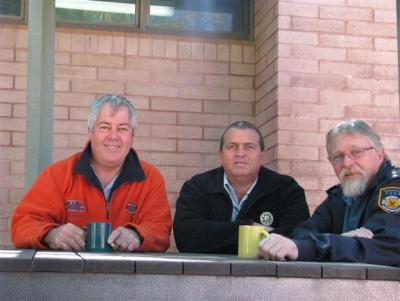 Photo:  Phillip having a coffee with AM FS Lee Vallance  and SES DM “BJ” BrianJohnson; 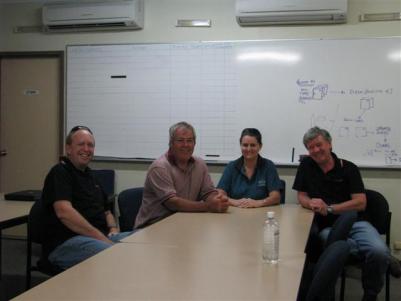 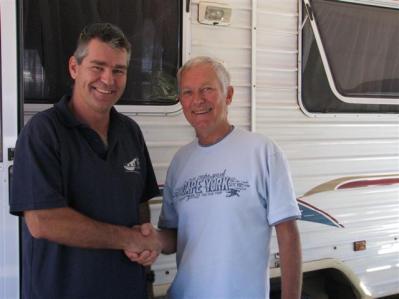 Photo:  Two of yesterdays rescue hero’s meet again. Jim Ridgwell and Darren Brooks meet at Exmouth, the first time for many years. Both of these guys are still SES volunteers with each having over 30 years service. 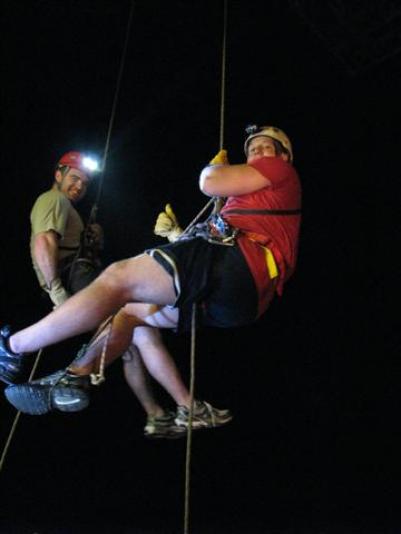 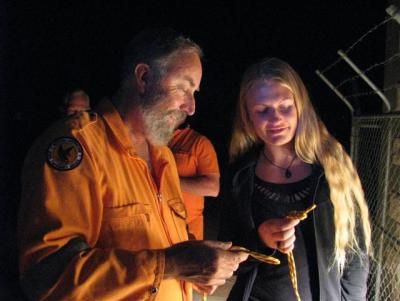 Photo:  A prospective new member at Exmouth is shown some rope knots.