15 years of dedicated  service to the State Emergency Service

It was May 1994, and Dianne Williams was sitting at home looking forward to a relaxing evening at home. But it was not going to be – Perth had just felt the wrath of the May 1994 storms, and the Perth SES unit (now called Northshore SES unit) were operational for four continuous days, assisted by many other SES units, some from as far away as Manjimup, Busselton and Geraldton. Back in those days, most volunteers slept on the floor of the SES headquarters.

About 7:00pm the first night, one of the (then) members, Leanne Williams, took it upon herself to contact her Mum and ask her to come in and feed the hungry hordes. Without any hesitation, Dianne came into the unit, bearing what she thought was enough food to feed a small army, but within about 10 minutes, it had all been consumed and more was required. The shops were all closed, so Dianne went home again and denuded her own freezer of everything edible, returned to the unit and cooked it all up.  And that was the start of Dianne’s SES career.

Sine those days, Dianne has been a regular attendee at the Northshore SES unit, in recent years, focusing her role as part of the Operations Team. Whenever there are multiple callouts, Dianne can always be found at the Mount Hawthorn base of the Northshore SES unit answering phones, dealing with faxes, calling local residents who have sustained damage to their property to confirm the details provided, rounding up additional SES volunteers as required, and allocating jobs to the various teams. Outside of the Operation room, Dianne is the administration and finance Section Leader.

On Wednesday 1st June 2011, Dianne Williams was presented with the 15 Years Meritorious Service Award, by Gary Gifford, Assistant Chief Operations Officer of FESA SES. The presentation was held at the Northshore SES unit with members, family and friends present.

Acting Local Manager, Nick Elliott said “This is a huge moment to celebrate. Being able to balance volunteering with work and family commitments is getting harder and harder these days. Dianne is one of our longer serving volunteers, who can always be relied upon to go that extra distance to ensure the well-being of our volunteers. Dianne has no desire to climb on to rooftops or to cut down trees, which is just great for us, as we need her elsewhere…!”

Nick added “Notwithstanding the above, if necessary, Dianne is always prepared to turn out with any team that lacks numbers. She will foot a ladder, drag debris out of the way, fill sandbags and (most importantly) will keep the householder informed as to what we are doing”.

As the administration and finance Section Leader, Dianne is also a member of the Northshore SES Committee. 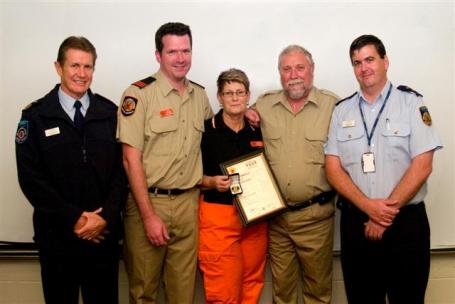