A search will resume today (Sunday) for a missing teenager  off Western Australia’s south coast after he fell into the ocean near Albany.  Police say the 18-year-old disappeared under the water at Salmon Holes on Saturday morning while he was fishing with his brother.   It is believed he fell into the water and witnesses say people nearby tried to throw him a life buoy, but he disappeared.  Inspector Greg Crofts from Albany Police says the teenager has not been seen since.   “A wave has come and knocked him on the head and it looks as though he just hasn’t been able to clamber up the rocks from his position,” he said.   “[It is a ] tragedy; he was right in front of his family some few metres away.”   It is understood he was not a strong swimmer.

Albany SES Volunteers were scrambled to the scene shortly after the incident occurred to search the area and to be prepared to rescue the teenager if required.   In addition three boats, a fixed wing aircraft and a police helicopter spent much of the day searching for the teenager but have been unable to locate him.  A dive team was called in to assist in the search later in the day.

Rescue teams have discovered a body in the ocean off Western Australia’s south coast.  Police say the body is likely to be that of a teenager who slipped and fell into the water while fishing with his brother at Salmon Holes near Albany yesterday morning.  But authorities say they will continue their search until they have confirmed the identity of the body.  A major air and sea search was launched yesterday, but hopes of finding the teenager alive faded, and today the focus turned from rescue to recovery.  It is not the first time someone has been washed off the rocks at Salmon Holes.  In 2003 15-year-old Nathan Drew drowned there in similar circumstances.  After his death, his family installed a silent sentry system including an emergency beacon and life buoys at the site.  But they were forced to take it down last year after it was repeatedly vandalised. 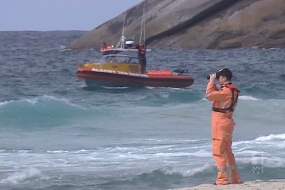 An SES Volunteer searches water for the missing teenager