Its with great sadness  the SES Volunteer Association advises that Pat Haywood a past long term member of Mandurah SES Unit has recently passed away.  Pat had been a significant contribitutor to Mandurah SES in its founding years. His passion as a career radio/TV technician extended into being a HAM operator and a Communications Leader for SES.  He taught  the basics of radio and building makeshift antennas.  He was deputy Local Co-ordinator/Local Manager.

He is remembered for having to step up and take the lead when Mandurah SES had a leadership and financial crisis in 1984. He introduced the concept of a unit management committee and sharing responsibility for management, training and funding. He went on to support the unit for many years as a deputy local manager for many years when the new manager Neil Davidson (deceased) was nominated.  He was supported by his wife, Gwen, another long term member and contributor of Manadurah SES. Both Pat and Gwen are held in very high regard by SES volunteers, with both of them having their names attached to some annual unit awards.

The SESVA President David Price, Committee members  extend their condolences to Gwen and the Haywood family.  The attached photo (a cut from a larger photo) was taken in the early 1980’s, the founding years of Mandurah SES.  In those days officers of the unit wore wore “blue”. 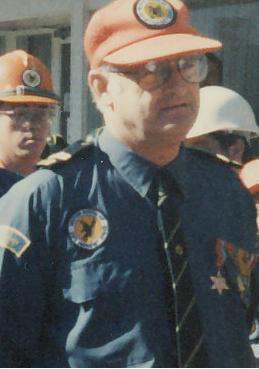