The state government has declared the record flood devastation in the Kimberley region a natural disaster and predict the cost will be ‘in excess of $5m’.  More than 217 residents were evacuated from Warmun and all 65 houses have been destroyed or damaged to the extent that they are uninhabitable.  The community art centre has also been lost while roads, power and sewerage facilities have all been damaged.

Meanwhile people in the towns of Wyndham, Kununurra and Halls Creek, including outlying communities in the Ord and Fitzroy River catchments, are asked not to panic buy as food, water, medical and other essential supplies are being continually airlifted into the flood affected region.  The flooding caused the river level at Fitzroy Crossing to reach a record-breaking height.

Over the past three days 217 people from the Warmun community were relocated by helicopter and bus to the Garrjang Village workers camp in Kununurra.  Other communities remain isolated, with roads cut by floodwaters, while access to Halls Creek and Kununurra is limited.

SES said food drops would continue over the next few days to isolated communities.

Attorney-General Robert McClelland said federal assistance would be provided through the Natural Disaster Relief and Recovery Arrangements (NDRRA) for people living in the local government areas of Derby/West-Kimberley, Halls Creek and Wyndham/East-Kimberley.

The assistance provides payments up to $388 per eligible adult and up to $194 per eligible child for emergency accommodation, food, essential clothing and other personal items.  It also covers temporary living expenses up to $150 a day per adult/family in country areas, housing repairs up to $10,000 and the replacement of essential household contents up to $10,500.

Other help includes restoration of essential public assets, interest rate subsidies for small business and primary producer loans up to $150,000, and professional advice grants and freight subsidies for primary producers.  NDRRA assistance is jointly funded by the federal and state government, and administered by WA Government agencies.  Mr McClelland said the assistance was designed to help people who had been severely affected by the floods.

“The Commonwealth Government will continue to monitor the situation to provide any further assistance that’s needed,” he said.  FESA chief executive officer Jo Harrison-Ward said the situation had been declared a natural disaster for the purposes of the WA Natural Disaster Relief and Recovery Arrangements (WANDRRA), administered by FESA.  Primary producers can apply for assistance to cover freight and cost of materials for boundary fences along major roads, professional advice grants and interest rate subsidies.

Local governments can apply for help to repair and restore essential public assets such as roads, while small businesses can seek interest rate subsidies on loans approved by Authorised Deposit Taking Institutions.  Deputy Premier Kim Hames said today that the State Government had declared the flood which devastated the community of Warmun to be a natural disaster, following a visit to the region.

Dr Hames said the March 10 monsoonal trough, which resulted in major flooding throughout the East Kimberley, had caused sufficient damage for it to be proclaimed an eligible event under the Western Australian Natural Disaster Relief and Recovery Arrangements (WANDRRA).  Based upon preliminary advice received from affected local governments, Main Roads and FESA, it is anticipated the estimated State expenditure on eligible measures will be in excess of $5million,” he said.

“I am pleased to say more than 290 members of the Warmun community have been safely evacuated to the Ord Stage II Camp (Garrjang) in Kununurra.  “Their safety is our first priority, and they have access to food, clothes and comfortable shelter.  We owe great thanks to the local government and emergency services for safely transporting community members, mostly by helicopter.

“I met with some of the evacuees yesterday who told me about their terrifying experience.  Their clothes and possessions have been washed away and many homes will require refurbishment or rebuilding.  “Sadly a lot of art in the renowned Warmun Art Centre has been lost.  The Minister said costs to repair roads, sewerage and housing were yet to be determined but would be significant.  “A building taskforce team from the departments of Housing and Indigenous Affairs is currently assessing buildings and homes in the community.”

The State Government is already working with local and Federal governments, agencies and community groups as quickly as possible to return Warmun to a thriving community, and allow people to return home. 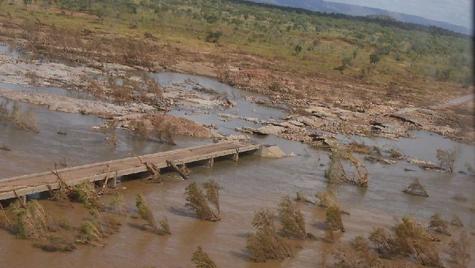