Perth is used to ferocious winter storms, but summer thunderstorms like the one that hammered north-eastern suburbs on Monday are rare.  On average, a summer thunderstorm hits Perth once every two years, though they are more common in the Wheatbelt, according to the Weather Bureau’s Neil Bennett.
Even then, summer rains rarely unleash the power displayed in the latest freak weather. “It was fairly unusual because there was a lot of moisture in the atmosphere,” Mr Bennett said. “That humidity, coupled with the very high temperatures, just kicked everything along.”   Monday’s rain was from four thunderstorms along a weather front called a squall line. 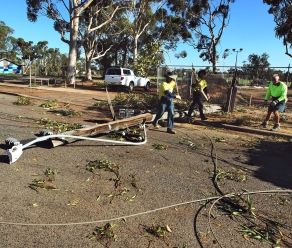 Much of Perth missed the rain while other areas were drenched, as rain fell along a localised strip and areas west of the front were mostly clear.  Because thunderstorms bring localised rain, it is difficult to forecast exactly where they will form and which area will bear the brunt of the wild weather.  The recent weather, including the cyclones in the North West, has been linked to an unusually strong La Nina event, which significantly warmed the ocean off WA this summer, meaning more evaporation and more rain.  Typically, summer rain evaporated in the atmosphere.

A Middle Swan college has more than $1 million damage after Monday’s storm tore the roof off a hall and damaged 19 other buildings.  Swanleigh Residential College was the worst-hit property in the storm, which uprooted trees, damaged 20 properties and left about 55,000 homes without power.  College executive director Ian Ludlow said the winds tore the roof off its Stowell residential hall, severely damaged four other buildings and left 20 buildings uninhabitable.

The damage bill was yet to be calculated but was expected to exceed $1 million.  Mr Ludlow said he went outside when he heard the roof ripped off the hall but immediately retreated as debris flew across the campus.  One panel of the hall’s roof hit a basketball ring with such force, it bent the steel pole in half.
“The noise was just unbelievable,” he said.  “There was debris going everywhere and it was far too dangerous to go outside to check the damage.”
La Salle College principal Debra Sayce said about 10 students from the school were in the 60-bed hall at the time and a 17-year-old student had minor grazing from debris.  The students, who were staying at the hall because of power cuts at the school’s boarding facilities, were left unsettled by the incident and had been offered counselling. 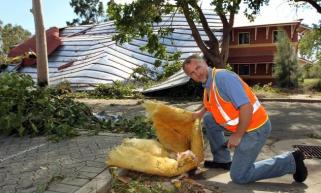 More than 10,000 properties in the Perth Hills and the Swan Valley were still without power late yesterday, a Western Power spokesman said.  Maintenance crews restored power to about 43,000 properties in the 24 hours after the storm and most affected homes were expected to have power by midnight last night.  Western Power crews responded to about 200 emergency and hazardous situations in the wake of the storm.

A Fire and Emergency Services Authority spokesman said more than 150 State Emergency Service volunteers had responded to 170 calls for help.
They had fixed roof damage and removed fallen trees from properties.  Most calls came from the City of Swan but help was also needed by residents of the shires of Mundaring, Kalamunda, Gingin and Serpentine-Jarrahdale.