Five people were rescued and several roads were flooded as Carnarvon recorded one of its highest river levels early today.  Despite the Gascoyne River peaking at just over 7m early Saturday morning, residents were spared the widespread devastation that rocked the community in December.

State Emergency Services received two calls for help, one from a family of four that was stranded and another person was airlifted to hospital for an unrelated medical condition.  About 20 people took refuge in the town’s evacuation centre as SES volunteers from Carnarvon, Kalbarri, Morawa and Shark Bay arrived to assist.

Several roads were flooded and Carnarvon was isolated by road but no homes were inundated. Nearby service stations were affected.  Mean while, people in Geraldton, Sandstone, Carnegie, Telfer, Nullagine, Tom Price and Kalbarri face the threat of severe thunderstorms that were expected to last until around midnight.

SES are warning people in or near Gascoyne Junction, Lyons River through to Carnarvon need to take care and remain vigilant as flooding continues.

As at 12.40pm the Bureau of Meteorology advises the river level at Nine Mile Bridge was 6.9 metres and falling. This level is expected to remain above 6 metres throughout the remainder of today.

The Department for Child Protection has set up a relocation centre at Carnarvon Civic Centre (Woolshed), Robinson Street, Carnarvon.One family was relocated by helicopter from North River Road after becoming isolated. 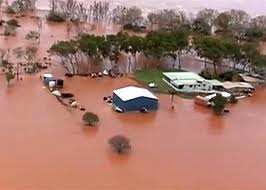