Daisy and Peter went on a call out to the northern outskirts of Perth. The search only lasted a couple of hours which was quite good as the temperatures were very high (Think around 39 degr cel) and there was only little wind.  It was an interesting search from other perspectives as Daisy encountered her first experience of seeing horses, Peter learned how good it is to have a good navigator / comms person

Due to the very high temperatures training this week-end was moved to night training which took place at Gnangara.  Attending were Leonie, Francis, Peter, with bodies Emma and Ashley, and naturally the esteemed Old Grey One.  When turning up at 8 PM the weather was quite humid and warm in the aftermath of a shower or two which had occurred during the day.  Having set up an area of 400 m x 400 m the intention was for the handler to be allowed to concentrate on controlling the dog with the other handlers taking turns to act as navigator.  This was indeed a very good learning experience, one which opened the eyes for the fact that night search is not the easiest thing in the world and that it is indeed helpful to have a navigator present.  It was also a learning experience for the navigators in how to work and how hard it can actually be to remain behind the dog handler.  The evening ended around 11 PM after having towed a certain individuals car out of getting bogged – which seems to have happened a couple of times lately. 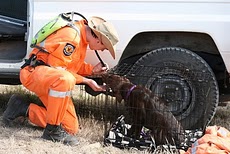 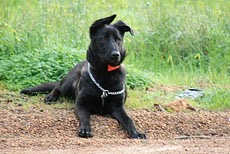 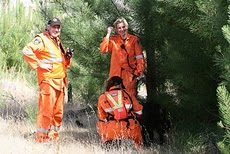 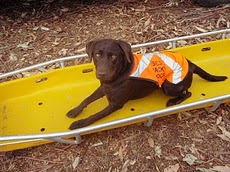