Water levels are expected to reach 7.9m as rain continues to pour down on the Western Australian coastal town of Carnarvon during the biggest flood to hit the region since 1960.  Carnarvon is located about 900km north of Perth, at the mouth of the Gascoyne River on the Indian Ocean.  Residents were alerted to the impending flood on Saturday and were warned to evacuate their homes as heavy rain pounded the region overnight.  An evacuation point was set up at the Carnarvon Civic Centre where about 80 people stayed overnight.

On Sunday, the SES said the river level at Nine Mile Bridge had reached 7.7m and is expected to peak on Sunday evening to about 7.9m.  Stream rises and localised flooding will also continue in the upper and middle areas of the Murchison River catchment.
The Bureau of Meteorology says heavy rainfall is continuing to pour down within the Gascoyne River catchment.  Shire president Dudley Maslen said it was the worst flood he had ever witnessed.  “Now that the sun has come up, it’s not as scary as it was last night,” he told AAP.  “But it’s still a record flood, much bigger than the 1960 flood that was 7.61m deep.  “This flood has been about 7.7m for some time … the hotel roof is only just peaking out of the water.”

Mr Maslen said the deepest point was at Fishy Pool where the water level had risen to 15m.  He said homesteads that had never experienced much rain at all were also a metre deep in water.  “People are sitting on their roofs. You just don’t think that will happen, it’s something you see in cartoons, not real life,” he said.

The shire president said a helicopter had been sent to rescue people who had been stranded on their roofs for 16 hours. Mr Maslen said there would be “substantial” losses to crops in the region including mangoes and melons.

“There are also vegies that are covered in mildew and mud so they will have to be thrown out too,” he said.  “It’s going to be a lot of personal cost for everyone. It will be millions of dollars.’  A FESA spokeswoman said the heavy rain had forced the closure of parts of North West Coastal Highway on Saturday, between the Shark Bay turn off at Overlander and the Minilya Roadhouse.

She said those roads would remain closed on Sunday.  State Emergency Services (SES) volunteers and staff will also remain in the area to help the residents.

Carnarvon  residents are being warned to brace for flooding in the next 24 hours after a massive tropical storm dumped a year’s rain on the Gascoyne region.  Hundreds of hectares of pastoral land were under water and Carnarvon residents were bracing for more flooding after heavy inland rainfall struck the Mid-West and Gascoyne region on Friday. The flooding is expected to cut the town of Carnarvon by road.

Dozens of SES volunteers from Carnarvon and Geraldton are assisting the Carnarvon community and  SES volunteers are being flown in from surrounding areas.  The Shire of Carnarvon is working to reinforce levy banks around the town.  A relocation point has been set up at the Carnarvon Civic Centre on the Corner of Camel Lane and Robinson Street and 30 people have taken advantage of the relocation centre.

Fire and Emergency Services Authority spokesman James McNamara said the deluge meant water levels in the inland river and creek systems were rising and could cause further flooding.  From 9am Thursday to Friday night, Carnarvon, 900km north of Perth, received a massive 204.8mm of rain  just under the 226.7mm yearly average.  At 4pm the Bureau of Meteorology said heavy rainfall has continued within the Gascoyne River catchment over the past 24 hours.

“Parts of the Gascoyne River are running at 7.3m and rising, so we’re preparing for the possibility of a coastal flood in Carnarvon itself,” Mr McNamara said.  North-West MLA Vince Catania said he had spoken to inland farmers who had left for higher ground after experiencing water levels of nearly 8m.  “Most of the inland pastoral stations are all flooded, including their houses, and the concern is that they’re saying they’ve never seen it flow so intensely,” Mr Catania said.

“It’s already greatly impacted on the horticultural district in Carnarvon with the amount of rain that’s occurred over a short period of time, and a lot of crops have been destroyed.”  The unprecedented deluge has smashed December rainfall records and severely affected fruit and vegetable crops.  Locals say grape and melon crops could be wiped out as fruit begins to rot in wet soil.

WA Bureau of Meteorology’s hydrologist Katrina Annan said the storm was caused by a monsoonal tropical low pressure system.  “Just because it hasn’t happened before, doesn’t mean it won’t happen again, particularly with the La Nina that we are having this season,” Ms Annan said.  Carnarvon resident Logan Trigg said homes had flooded and the wet ground had caused several power poles to sink and lean across the road.

“There are a couple of cul-de-sacs that are sandbagged, the street over from us is flooded and I had to report a couple of power poles at about 5.30am,” Mr Trigg said  “It’s just consistent rain and Carnarvon is not equipped to get rid of it quickly”.  The downpour has flooded North West Coast Hwy, closing it between Shark Bay,  Carnarvon and Minilya Roadhouse. 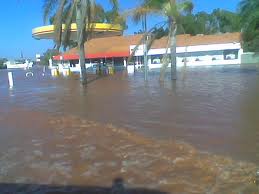